The Jacksons is a BBC schools radio series from the 1950s and 1960s, covering Citizenship and PSHE for secondary school pupils.

The Jacksons was one of the first series specifically designed to interest and inspire struggling school children by harnessing the entertainment value of broadcasting.

It was a family serial all about Mr and Mrs Jackson, their children, and their neighbours the Webbs, as they encountered day to day problems and social issues such as getting a job (Ken Thinks of a Job, autumn 1960), a dance at the youth club (Fancy Dress Night at the Youth Club, summer 1962) and the marriage & subsequent moving house of Betty Jackson (Betty Gets Married, summer 1961), all designed to help children feel more confident about dealing with such issues in their own lives.

The Jacksons also tried making and doing things that children could try for themselves (Ken Starts a Garden, spring 1957; Judy Joins The Library, summer 1962).

The series was produced as an on-going drama serial, and the characters grew older and make lasting changes in their lives, even though the children listening in at school would have grown out of the series after a year or two, and new listeners would not know what had happened before. Harry Jackson wacs a schoolboy who had his 15th birthday in the second ever episode (Happy Birthday, autumn 1956), and by the end of the series he was a 21-year-old factory worker (Harry's Twenty-First, autumn 1962). There were recurring characters such as the travelling Uncle Bert, and storylines were continued across the year, just like a modern soap opera. As the series went on and the Jackson children grew up, the series focussed more on the younger children of their neighbours the Webbs.

All the programmes were presented as "BBC recordings" in the Radio Times, and according to records on the free online version of the BBC Programme Catalogue they were recorded several months in advance of broadcast, for instance an episode broadcast in March 1963 was recorded in the previous December.

The series was apparently drawn from an experimental term of radio programmes broadcast in Scotland[1], which may have been Round and About. The concept and format of The Jacksons gave inspiration to a schools television series called Friday Magazine in 1960, which then developed into the successful family serials of Television Club, lasting for another decade.

The series is set in the fictional small country town of Fenton, where the Jacksons live at 23 Willow Street. They have a garden with a greenhouse.

The town is on the River Fen and has its own railway station and hospital amongst other amenities. There is a Youth Club in the town where the children gather, and the local newspaper is the Fenton Gazette. One of the neighbouring towns is called Canfield.

A map of the town was printed at the end of the teacher's notes each term, and is reproduced below. 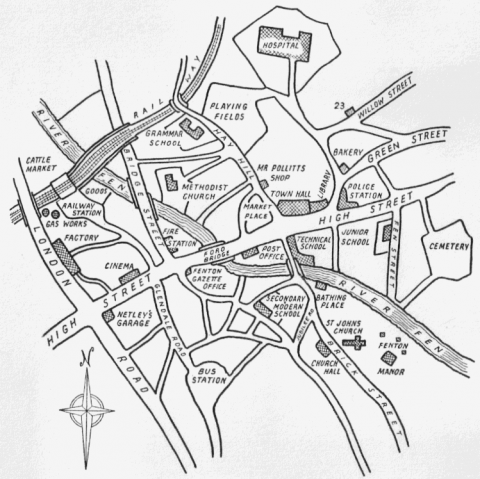 A map of the town of Fenton. Number 23 Willow Street, where the Jacksons live, is in the top right.

Here is a list of the characters who appeared in The Jacksons, either regularly or from time to time. In order to offer a standardised list, the ages given for the characters are their ages in the summer term of 1962, as this is when I have the most comprehensive information available.

The Webbs are the next-door neighbours of the Jacksons and have younger children. They live at 21 Willow Street.

These are other characters who appear with the Jacksons from time to time.

The actors who appeared in the programmes were never credited in the Radio Times or the teacher's notes to the series, so I have very little information about who played whom. The listings in the free online version of the BBC Programme Catalogue for the few surviving episodes identify Stanley MacKenzie as the narrator.

If anybody has any more concrete information about actors in the programmes, please get in touch.

A large number of episodes, including the first six episodes of the series, were written by Philippa Pearce who would go on to become the acclaimed author of children's books including Tom's Midnight Garden.

There seems to have been a team of regular writers who provided most of the scripts for the series. The following list shows the regular writers, how many episodes they were responsible for, and when their episodes were first broadcast.

An almost complete list of the writers of almost every episode can be found on this site's episode list for the series.

Please note there are three episodes whose writer credits are not known to me.

Here is a list of every episode of the schools radio series The Jacksons, mainly based on the Radio Times listings with a few additions from the sources listed on the main page about the series.

There are some cases where two episodes have the same title, especially towards the end of the series. I am pretty sure they are really separate episodes and it is just coincidence that the same title was used, because the writers are different. The only exception is At The Pantomime, a title used in January 1961 and January 1963, both times written by Jeffrey Segal - so it's possible this was the same episode both times.

There are three episodes in the list with no information about who wrote them. If you can fill in the missing information, please get in touch by email.

There was a new episode of The Jacksons every week throughout the school year for seven years, from 1956-7 to 1962-3, during which time over 200 episodes were produced.

According to the free online version of the BBC Programme Catalogue, recordings of only 2 episodes - less than 1% of those produced - have been kept by the BBC, the rest may be lost forever. I am not aware whether recordings of other episodes are held by the National Sound Archive or other collections, if anybody has any information about this please get in touch by email.

The episodes in the BBC archive are:

Episodes that were never made

Every year the BBC used to send an annual programme guide out to schools, listing all the programmes they planned to broadcast in the coming school year. When these were printed, scripts were being prepared for the episodes of The Jacksons to be broadcast in the autumn term, but there were only provisional plans for the rest of the school year.

Several of the 'potential' episodes of The Jacksons listed in the annual programmes were never made. Here are some of the titles which were planned but abandoned:

The Jacksons was always broadcast at 2:30pm on Monday afternoons on the Home Service. However it was never heard in Scotland - the series Scottish Heritage was broadcast in the timeslot instead.

Scottish listeners had their own series for "less able" children of about 13: Round and About was broadcast in Scotland only on Mondays at 11:20am. Episodes of Round and About were only 15 minutes long, shorter than The Jacksons programmes, and offered a range of documentary or magazine programmes including some dramatisations of famous texts - for instance The White Company by Arthur Conan Doyle, produced in 3 episodes in summer 1961, and A Christmas Carol by Charles Dickins in autumn 1957.[4].

Sources used in compliing this page. I have never heard any of the programmes themselves.

Retrieved from "https://www.broadcastforschools.co.uk/mediawiki/index.php?title=The_Jacksons&oldid=47752"
Categories:
Cookies help this website deliver its services. By using these services, you agree to the use of cookies.
History
Browse propertiesCite this pagePage informationPermanent linkPrintable versionSpecial pagesRelated changesWhat links hereRecent changes