A Place to Live 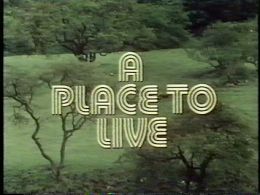 4 images from A Place to Live

A Place to Live is an ITV schools TV series from the 1960s, 1970s and 1980s, covering Nature for primary and secondary school pupils.

A series of straightforward, friendly natural history films, searching out the kind of wildlife that British schoolchildren could find in their local environment and looking at it up close, to encourage viewers to undertake similar field work themselves.

In its later years ITV pitched A Place to Live to schools as "a series about the 'biology around you'," the phrase an allusion to Granada TV's long-running History Around You series for a similar age range, which was often described on the same page in the annual programme guide booklets.

The first series of 16 films, originally screened in 1969, took an interest in things to be seen in and around an ordinary house and garden - insects, spiders, birds, frogs, wasps and in the final episode man. These programmes were made and scripted by producer Jack Smith but narrated by Granada newsreader Bill Grundy as if he were exploring the area himself.

A new series of 8 films was screened in 1976, this time looking at wildlife to be found around ponds, at the seaside, and in urban environments. Jack Smith took over the narrating duties himself, and continued to act as the voice, as well as producer, director and writer, of the series until it concluded.

A final dozen episodes were added in several small batches in the early 1980s: an exploration of woodlands and a dale in Derbyshire; further detailed looks at butterflies, moths, flies and spiders, and a small unit of episodes looking far further afield than any others - to the Negev desert in Israel, a house in Arizona, and even the past.

The programmes showed actual field work with an investigator (producer Jack Smith) looking at and picking up the things that interest him, often seen in the distance or just off to the side of the camera. In the original 1969 series - repeated into the early 1980s - he would frequently point things out in close-up with the tip of his yellow pencil. In later episodes the pencil was retired and he would point things out with his fingertips.

Episodes generally concluded by encouraging viewers to get out and observe nature in areas around them, perhaps even to pick up and investigate (but always put back again afterwards) things that interested them. The series also had an environmental message which sometimes came through. The final episode of the original 1969 and 1970 broadcasts looked at man's impact on his environment.

Jack Smith said that he felt it would be "rather sentimental to start at the pollution end of the story,"[1] when describing a natural history topic, but he clearly felt passionately about the issue and this sometimes came through. The episode The Tiger in the Pond ends with a long, direct message to viewers, spoken over the strains of Handel's organ music:

“But we, people, are the only animal who hunt and sometimes kill for fun. We must stop destroying things. All the creatures that live in this pond have as much right to live on planet Earth as we have.

It's up to us, it's up to you, to look after the places where the wild things live. Don't poison them with rubbish, don't let other people spoil them for you. Find out about the living things around you, there are lots of exciting things to look for...

...But one day there may not be. The rain may one day fall onto dead ponds. It's up to people like you to make sure that that never happens.”

It took quite a while for the series to find its perfect place in schools, as the subject matter and style proved useful in different ways than the producers originally envisaged.

The original broadcasts of the first 16 episodes in 1969 and 1970 were pitched as suitable for 14 and 15 year-olds - at the time the top of the secondary school age bracket - in the annual programme guide for schools, though with an expectation that it would be "acceptable over a much wider age and ability range." The target was expanded to 13 to 16 year-olds when TV Times listings were published during the year.

After a three-year break the same films were broadcast again in 1973, this time with a suggested age range of 9 to 12 year-olds.

A further three-year break followed and then the series returned in 1976 with its second batch of episodes, covering ponds, cities and the seaside. These were pitched to schools as suitable 8 to 11 year-olds - now squarely in the primary school bracket - and there are notable differences in the style of the commentary for these later episodes, as the Latin species names and other scientific vocabulary used freely in the earlier episodes were replaced by more accessible explanations and vocabulary in the new episodes.

The series settled down after this, broadcast in every summer term and a few spring terms throughout the rest of the 1970s and 1980s pitched at 8 to 11 year-olds, with new episodes occasionally being introduced alongside those made since 1976 and occasional repeats of the 1969 films.

It's easy to imagine a natural history documentary, destined to be shown over a decade or more, being meticulously planned around the individual creatures and activities that the producers want to capture to illustrate a point, and seeking out the footage that they need to illustrate it. But A Place to Live did not work like that. Instead it was created in a way that basically reproduced a school nature trip - albeit over an extended period of time and with basic scientific equipment and cameras - to genuinely observe what wildlife there was in a certain area.

The producer Jack Smith explained in 1976: "we didn't go with preconceptions about illuminating the life-cycle of any particular creature. We went out and filmed for day after day for eight or nine weeks. There was no set plan, but gradually we began to feel the excitement building up as we realised we had quite a lot of material on, say, the Great Diving Beetle or the Damsel Fly."[1]

The film cans were then piled up by subject in the cutting room, and they found that it was a good year for pond snails but a bad year for newts, and so newts aren't featured in the unit about pond life apart from a brief appearance by a newt tadpole.[1] From there episodes were constructed and scientific themes emerged, illustrated by the footage that was available. For example the programme about water tiger beetles shows larvae in the pond, and then shows Jack Smith attempting to catch a fully-grown beetle, but he explains in the commentary that he was unlucky and so the programme does not show the adult beetle.

Vanessa Kirkpatrick was researcher for the later 1980s episodes and described a similar process to the Granadaland oral history website, where "under the energetic and scrupulous eye of Jack Smith (Head of Schools programming), we roamed North Manchester industrial estates for rare orchids and filmed on polders in the reclaimed land of Lelystad."[2]

This method of production resulted in a series which was relatable, realistic, and quite passionate about its subject. Jack Smith said:

“I just want to look at these marvellous creatures, superbly adapted, many of them very beautiful, very ferocious, very exciting, and when our audience shares the excitement in water scorpions, alder fly larvae and water beetles, and they want to enjoy watching wild life, then it will be a reason for justifying some study of conservation and an ecology theme.

It won't be in the abstract but from real observation.”

The Independent Broadcasting Authority agreed - praising A Place to Live as "characterised by patient and detailed filming with a message of respect for the ordinary environment".[3] 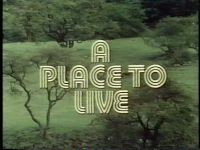 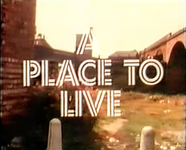 At the start of each episode the series title simply appears in white text over the introductory footage of the particular episode.

The style of that title caption changed over time. The first two series, from 1969 and 1976, used a typeface with each letter made up of two parallel lines with the overall letter shapes straight, angled or curved in normal ways.

Later episodes made in the 1980s used a difference typeface with each letter made up of three parallel lines and more stylised, curved letters overall. This later typeface appears to be Pump Triline.

The music used over the opening and closing titles is the Organ Concerto No 4 in F Major, Opus 4, by Handel - the start of the first movement to start a programme, and the fourth and final movement to close it.

The very first episode was never given a title in the TV Times listings for any broadcast, nor in Granada's archive catalogue - but presumably it did have a title for the teachers' notes, which I haven't seen. Please get in touch by email if you can help to identify it!

Episodes marked with * were first shown as previews before the dates above, which are for transmissions specifically to schools.

Each year's broadcasts were accompanied by a booklet of teachers' notes, providing scientific and biological background on the subject of each episode and suggesting ways they could be used in class. The notes cost 2 shillings and thruppence when first released in the 1960s, then 12p in decimal money in the early 1970s, and by the late 1980s they had risen to £1.35 each!

A pupils' booklet costing 10p each was advertised to schools to accompany the 1973 broadcasts, but I am not certain whether it was ever actually written and published, and it was never mentioned again.

After the series had concluded on television, two VHS videos were released to schools around 1990, priced £35 each and containing a total of 22 episodes between them. I am not certain which episodes were included, but suspect they were the 21 episodes produced from 1976 onwards plus one of the original 1969 episodes, most likely A Spider's Tale which was, alone from that run, repeated on TV as late as 1982. If you have seen the videos and can confirm please get in touch by email.

As well as the broadcasts to schools during term time, episodes of A Place to Live were shown by several ITV regions on weekday mornings during the summer holidays between 1976 and 1979, for a general audience.

In 1976, five episodes from the second series were shown on Wednesday mornings at 10:10am from 28th July to 25th August.

In 1977, the four episodes from the second series about the seaside were shown on Monday mornings at 9:30am from 1st to 22nd August.

In 1978, seven episodes from the first series made almost a decade earlier were shown on Wednesdays at 9:30am from 28th June to 9th August - these were the final broadcasts of several of those original episodes.

In 1979 the entire second series of 8 episodes, freshly repeated for schools between April and June, was shown again on Tuesday-Friday mornings at 9:30am from 10th to 20th July.

The films were shot in colour from the very beginning, even though very few schools had colour televisions in the late 1960s when the series began.

All 37 episodes have been safely preserved in the Granada Television archives, as well as original film sequences from several episodes including the very first.

The cataloguing was a little imperfect when the records were released in the Granada archive listing at itnsource.com - the broadcast dates under which the episodes were filed having several anomalies. For example the 1969 episode Bush with a Basement was filed under August 1975, and the entire second series of eight episodes from 1976 was assigned to sequential days (including weekends) in March and April of that year, apart from one recorded with a date in 1969 presumably due to a typing error.

But all of the episodes are there to be found!

Share
Retrieved from "https://www.broadcastforschools.co.uk/mediawiki/index.php?title=A_Place_to_Live&oldid=50040"
Categories:
Cookies help this website deliver its services. By using these services, you agree to the use of cookies.
History
Browse propertiesCite this pagePage informationPermanent linkPrintable versionSpecial pagesRelated changesWhat links hereRecent changes