Time and Tune: The Wind in the Willows

Previous unit: Over the Moon

The Wind in the Willows is a unit of the BBC schools radio series Time and Tune from the 2000s, covering Music for primary school pupils.

An adaptation of Kenneth Grahame's classic story The Wind in the Willows with original songs. Mole and Rat live on the riverbank and enjoy messing about in boats. Their friend Toad decides that he enjoys driving motor cars. Mole ventures into the Wild Wood and goes missing, but is rescued by rat.

Toad's friends try to stop him from driving around dangerously, but he escapes from them, "borrows" a car and ends up in prison. Meanwhile Ratty and Mole search for the missing son of their friend Otter. Toad escapes from prison but finds that the creatures from the Wild Wood have taken over Toad Hall...

The programmes are presented by Jacqui Dankworth from "Willow Cottage" - from where she can see Toad Hall through one of the windows - retelling the story as if it had recently happened. The story extracts are dramatised with multiple actors and sound effects.

This unit did not have a theme tune, but each episode begins with a short instrumental extract from the song to be featured in that episode.

Time and Tune had previously covered Scenes from The Wind in Willows in spring 1986, more than fifteen years earlier, with completely different songs in a different style. This new production includes more of Kenneth Grahame's original storyline than the 1986 production.

All eight songs from this unit, with a short extract from each.

SongA Lovely Day to Be Alive

Come on and join us in our story,
It's a lovely day to be alive.

No fresh air, no open road,
There's no one else to blame you foolish, foolish toad.

The piper, the piper, who stands at the gates of dawn,
Who comes when the day is born.

My home is everything to me,
My home, it's where I want to be.

Now boys altogether, side by side we join the fight.
The hour is done, the talking done, we'll put our foes to flight.

Never were there better friends than Ratty and dear Mole,
When Toad their friend was in a spot they came to heed his call...

The singers were also credited (at the end of episodes 5 & 10), but I don't know how to spell their names! If anybody has the Wind in the Willows CD and can send in the credits, please get in touch by email.

The ten episodes from this unit were first broadcast in the Spring 2003, on Thursday mornings at 3:15am on BBC Radio 3.

They were repeated in Autumn 2004, Spring 2007 and Autumn 2008, and for each of these repeats the series was also available as RealAudio files on the BBC School Radio website "Listen Again" service, with each episode available for seven days following its radio transmission. In 2004 the Listen Again files were taken from the school radio tapes, with short announcements before each episode about the content of the programme and available resources. But for later repeats the Listen Again files only contained the episodes as broadcast. 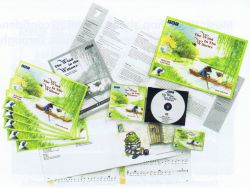 The Wind in the Willows was accompanied by the usual illustrated pupils' pamphlets (available in a pack of 5 originally costing £9.99) containing the words and tunes to all of the songs, and booklet of teacher's notes (originally costing £3.99) which also came with a copy of the Playscript.

An abbreviated set of teacher's notes, containing basic information about the episodes and classroom preparation but none of the lyrics or music, was published on the BBC School Radio website to accompany the repeat runs in 2007 and 2008.

Share
Retrieved from "https://www.broadcastforschools.co.uk/mediawiki/index.php?title=Time_and_Tune/The_Wind_in_the_Willows&oldid=49635"
Categories:
Cookies help this website deliver its services. By using these services, you agree to the use of cookies.
History
Browse propertiesCite this pagePage informationPermanent linkPrintable versionSpecial pagesRelated changesWhat links hereRecent changes