Summing It Up is an ITV schools TV series from the 1960s, covering Mathematics for primary school pupils.

Responding to the trend, firmly in place by the early 1960s, of teaching mathematics to junior children by practical experience and application rather than arithmetic drills, this series demonstrated basic mathematical ideas and also their real-world usage.

Summing It Up was partly recorded on location at two "go-ahead" London primary schools: the De Lucy Junior School and Eliot Bank Primary School[1]. Children were shown investigating things in the classroom, but as the series went on emphasis was increasingly placed on showing experiences which were out of reach of the everyday classroom, for example investigating Time and Distance in a British Rail Line Traffic Manager's Office, and reading gas and electricity meters. Teachers were encouraged to reproduce the more simple demonstrations - such as pendulum work - in the classroom after the programmes.

The series took a particular interest in the history of mathematics, to explain why counting and calculating have become so important to mankind, and to interest pupils in the development of standard measures. At the end of each term the programmes took a light-hearted turn, with a revision quiz just before Christmas 1961, and a look at puzzles and conundrums just before Easter.

In the series' second year, 1962-3, all of the original autumn term programmes were dropped, replaced by 10 new programmes interspersed throughout the year. The remaining 16 programmes from the first year were repeated, but in a different order. 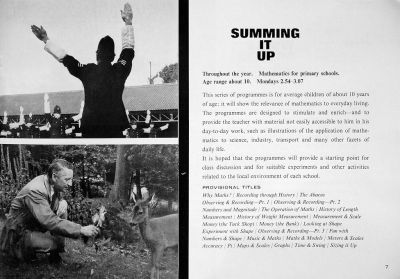 Preview from the 1962-3 annual programme guide

This was just the second mathematics series on ITV (following 1957's World of Figures). It came to an end after two full school years on the air and was not immediately replaced. But in 1964 a new series called Primary Mathematics was introduced, for the same age group and also produced by ATV in Birmingham. 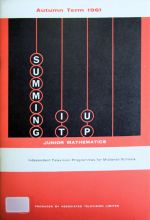 Teacher's notes, autumn 1961
The series was accompanied by the standard ITV schools fare of a single booklet of notes for teachers. The booklets were 16 pages long in the spring and autumn terms, 12 pages long in the summer, printed in red and black, and including several black and white photographs showing maths investigations in progress.

The front cover design shows the words Summing It Up arranged on an abacus. It is possible that this was also the title design shown on screen, but I have not seen any episodes of this series so I'm not sure.

Share
Retrieved from "https://www.broadcastforschools.co.uk/mediawiki/index.php?title=Summing_It_Up&oldid=48986"
Categories:
Cookies help this website deliver its services. By using these services, you agree to the use of cookies.
History
Browse propertiesCite this pagePage informationPermanent linkPrintable versionSpecial pagesRelated changesWhat links hereRecent changes