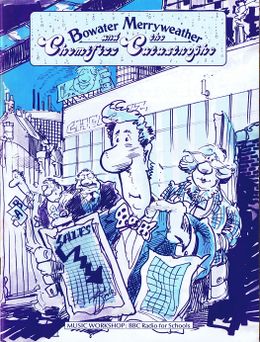 Bowater Merryweather and the Chemifizz Catastrophe is a unit of the BBC schools radio music series Music Workshop from the 1980s and 1990s.

“This term's musical comedy tells of how the rivalry between two fizzy drink manufacturers leads to industrial espionage of farcical ineptitude.”

A comic musical about big business, soft drinks, and the golden rules of spying. Bowater Merryweather is a bottle corker from a small family drinks firm, who finds himself in the cut-throat corporate world of the disgusting, artificial, best-selling soft drink called Chemifizz. When circumstances align to allow the good guys to get the upper hand, Chemifizz's chairman goes all out to steal the secret recipe.

Ian Humphris presents the first 9 episodes, introducing the songs verse by verse, inviting listeners to join in with the percussion, and singing the male parts of the songs to piano accompaniment, with school choirs from London and the surrounding area singing the other parts. Actors perform small parts of the story each week as well.

The final episode is a full radio production of the musical with professional actors, sound effects and music.

The unit had been previewed in the 1987-88 annual programme guide as "a mini-musical recounting (in farcical style) a story of Espionage and intrigue."

All songs have lyrics by Derek Farmer and music by David Stoll.

One day his boss, best friend and the only other employee, founder's daughter Harriet Bentwhistle has to fire Bowater as there isn't enough business. She does so with great regret, sobbing as she tells him they will work together no more.

Problems you share together
Always seem less than you fear

Sung by Bowater and Harriet

After a few weeks Bowater goes to look for work on the other side of town, at the giant factory of Chemifizz (Drinks) Ltd. He is interviewed by the chairman Gramniverous Moneystrangler ("G.M."), who has no use for an old-fashioned corker as his up-to-date and character-less soft drinks require canning. Bowater confirms than he can can cans and is hired.

Moneystrangler's assistants Bradfield Backscratcher and Augustus Bootlicker burst in to share the latest sales figures, which show more cans of Chemifizz were sold last month than any other soft drink. However there is a rumour that Moneystrangler bought three million cans himself, at which he is outraged...

Surely there is no one who would question my good name?
- No one.
- No one.

Sung by Moneystrangler, with Backscratcher and Bootlicker

... and demands they come up with a new advertising campaign to prove that people like Chemifizz, as well as a quiet warehouse to store three million cans of Chemifizz.

Bowater visits Harriet and tells her that one day he will come back to make the Fruit Elixir as successful as Chemifizz, as he has a feeling that things will get better.

Suddenly I've got this feeling
That my life is just about to change.

Sung by Bowater and Harriet

Backscratcher and Bootlicker come up with a blind taste test advertising campaign for Chemifizz, which is a great success and sales continue to increase.

The ads attract the attention of Nesta Rantson of the investigative TV show "What's Life", who conducts her own blind taste test revealing Hattersley Bentwhistle's Magically Carbonated Fruit Elixir to be the true favourite.

Harriet's business suddenly booms and Bowater returns to work with her. Moneystrangler decides to steal the Bentwhistle recipe so he can sell a knock-off product at half the price and put them out of business. He needs somebody to undertake the necessary industrial espionage.

When you begin in bus'ness and nobody wants to know,
Well then, you do it yourself.

So Backscratcher and Bootlicker need to do it themselves. He summons Priscilla Pry of the Cloak and Dagger School of Espionage to teach them the spy's golden rule, which is to keep your head or you're dead.

There'll be times, when you are totally confounded.
At such times, you would be well advised to play it cool.

Sung by Priscilla with Backscratcher and Bootlicker

After a week of training Backscratcher and Bootlicker set out after dark to infiltrate the Hattersley Bentwhistle factory.

Nothing to fear, no one will hear,
That I know.

Sung by Backscratcher and Bootlicker

A screeching cat sends them packing, so Mooneystrangler determines that he will really have to do it himself this time and reaches for a disguise.

Harriet and Bowater are struggling to keep up with demand and are relieved when a trio of willing new, disguised-looking workers led by a "Mr Cashthrottler" arrive to help with the carbonating machine. They proceed to search the factory for the Fruit Elixir recipe.

It doesn't take long for Bowater to realise who the new workers are, but by the time he does the "Cashthrottler" trio are crowding round a recipe they found under Harriet's phone. And while everyone is distracted the over-worked and unattended carbonating machine explodes.

Moneystrangler unmasks himself, delighted by his recipe, until he discovers it is for Harriet Bentwhistle's Wonderfully Warming Thick Winter Soup.

In the ruins of their factory, Harriet and Bowater are philosophical about their situation.

Life's a funny thing with a million surprises.
Hopes are resurrected, even when they're least expected.

The comic production of Bowater Merryweather has some great moments.

Mr Backscratcher and Mr Bootlicker concoct an advertising campaign involving a blind taste test for "Mr and Mrs Fizzy Drinker in the Street". Mr Moneystrangler takes part in a demonstration. He tries drink A which is awful, and drink B which is even worse. And so he prefers drink A, which is his own characterless soft drink, Chemifizz. Close runner-up drink B is revealed to have been "a mixture of vinegar, washing-up water and engine oil." The adverts are tweaked and become a great success! 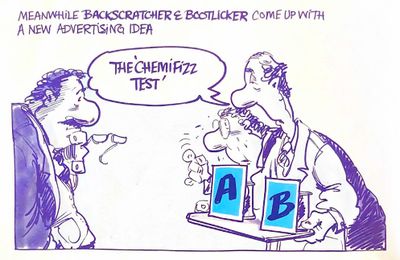 Backscratcher and Bootlicker demonstrate the Chemifizz test, from the pupils' pamphlet

Later Moneyscratcher contacts Priscilla Pry to enrol his minions in her spy school. She first arranges a rendez-vous on the third bench along at the boating pool in the city park, where they must carry a pack of sandwiches. Arriving, they hear a voice coming from a nearby tree and guess that Priscilla has disguised herself. In fact she has placed a loudspeaker in the tree and disguised herself as a litter bin. Passing on the address to her spy school on a duck floating on the lake, Priscilla asks for the sandwiches to be thrown into the bin as she needs her lunch.

I don't have credits for the actors who appeared in the Bowater Merryweather and the Chemifizz Catastrophe radio performance. If you can help please get in touch by email 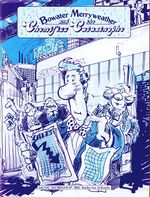 Schools could purchase pupils' pamphlets giving the words, music and untuned percussion for each of the songs, which is referred through in detail in the broadcasts. It also contains cartoon illustrations by Paul Davies showing the basic storyline.

Separate sets of melodic instrument parts for each song, and an acting script adapted from the radio performance to be used in the classroom, were also distributed free of charge from the production office during the broadcast term.

And recordings of all 10 episodes

Share
Retrieved from "https://www.broadcastforschools.co.uk/mediawiki/index.php?title=Music_Workshop/Bowater_Merryweather_and_the_Chemifizz_Catastrophe&oldid=50076"
Categories:
Cookies help this website deliver its services. By using these services, you agree to the use of cookies.
History
Browse propertiesCite this pagePage informationPermanent linkPrintable versionSpecial pagesRelated changesWhat links hereRecent changes