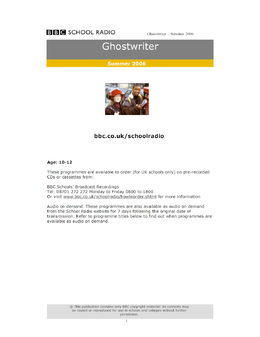 Ghostwriter (radio) is a BBC schools radio series from the 1990s and 2000s, covering English for primary and secondary school pupils.

A series of puzzle-solving mystery serials based on the Ghostwriter TV series. This radio series adapts four of the Ghostwriter novels and invites listeners to gather the signposted clues in the story to solve mysteries with the team.

The Ghostwriter TV series was a co-production with the US company the Children's Television Workshop and made mostly in New York. The radio series was made by the BBC in London, but used the original sound effects and music including the theme music, sung by TV series star Blaze Berdahl. New actors play the original characters from the TV series.

The programmes are structured interactively around listeners compiling their own Ghostwriter casebook with clues to the solution of the mystery. Whenever a pertinent piece of information is about to be given in the story, a sound effect representing the 'Ghostwriter' character is played before and after this 'clue', prompting listeners to write it down. The clues are reviewed at the end of each story to reveal the solution.

Like the TV series on which it is based, the purpose of this radio series to to encourage its audience with reading and writing, with the motivation of an exciting story laced with the importance of reading to prompt imaginations, and the interactive clue element to promote the importance of writing skills.

The first production in 1993, A Match of Wills adapted from the book by Eric Weiner, is narrated entirely by Rico Ross, providing the voices for all of the Ghostwriter team - Jamal, Lenni, Alex, Gaby and Tina. The story involves a treasure hunt for an inheritance left to Jamal by an old woman he meets at a chess club, and is a curious choice for a solve-your-own puzzle for UK listeners since the solution involves

recognising that the clues all relate to facts about a particular former president of the USA, which would not be part of a standard UK school curriculum.

The first series also adapted Steer Clear of Haunted Hill, also by Eric Weiner. The original book is told in two completely separate halves, diary entries kept by Alex and Gaby with clues emerging from differences in their experiences of a camping trip during which Lenni's dad Max goes missing. The radio version intertwines the two narratives, but uses two child actors to play the roles of Alex and Gaby.

A second series of adventures followed two years later in 1995. There were again two serialised adaptations starting with The Clinton Street Crime Wave by Laban Carrick Hill, an investigation into a series of robberies near Alex and Gaby's family bodega. The final story is adapted from Digging for Clues by Amy & Elizabeth Keyishian, about archaeological finds on a site designated for a new supermarket.

The second series continues to use child actors playing the characters, with The Clinton Street Crime Wave including Hector and Lenni, then Digging for Clues featuring Hector and Tina from the Ghostwriter gang plus their mysterious correspondent Maartje.

First a summary of the stories and when they were broadcast:

And details of the transmissions:

These few credits are transcribed by ear. If you can help fill any gaps please get in touch by email! 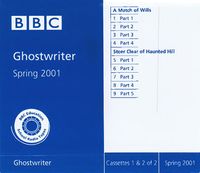 A booklet of teacher's notes was available every term, covering both stories for the term combined. These were initially printed and available to order for £2.50. For the final repeat run in summer 2006, a PDF version of the series 2 notes, without professional layout & design, was made available freely on the BBC School Radio website.

The notes include worksheets with spaces to write down the clues from each episode and questions about the characters.

Each series was also available to schools as a double audio cassette pack in the year when it was broadcast from 1995 onwards, initially costing £2.00 and rising to £2.30 (including VAT) by 2001. For the final repeat in summer 2006 the cassette had risen to £4.00 +VAT and this series was also distributed on CD for £4.50 +VAT.

In the 1990s the BBC also distributed copies of a small number of the Ghostwriter paperback books to schools, specifically including the novel A Match of Wills from the radio series, plus the titles Courting Danger and Other Stories, The Ghostwriter Detective Guide and The Big Book of Kids' Puzzles

And recordings of all 17 programmes

Share
Retrieved from "https://www.broadcastforschools.co.uk/mediawiki/index.php?title=Ghostwriter_(radio)&oldid=51265"
Categories:
Cookies help this website deliver its services. By using these services, you agree to the use of cookies.
History
Browse propertiesCite this pagePage informationPermanent linkPrintable versionSpecial pagesRelated changesWhat links hereRecent changes