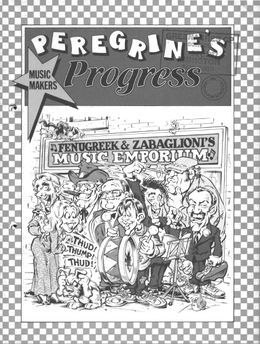 Previous unit: The Choir Outing Next unit: Swashbuckling for Beginners

Peregrine's Progress is a unit of the BBC schools radio series Music Makers from the 1980s, covering music for primary and secondary school pupils.

A comedy about an ambitious but penniless young man called Peregrine Warpbucket who dreams of being a percussionist. Armed only with a broken drum sold to him for a penny by a kindly music shop owner, he makes his way through job opportunities without losing his optimism. The friends he makes and talent for sound effects that he develops come in useful when he encounters an American millionaire, his wife who dreams of stardom, and a pair of villainous thugs.

The magazine features and quiz times in the programmes cover percussion music.

A 24 page pamphlet containing the words and music to the songs, with cartoon illustrations by Paul Cemmick outlining the story in between, and photos of different percussion instrument to accompany the magazine features in the broadcasts. 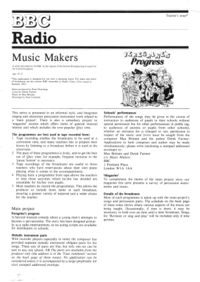 A 12 page booklet containing an outline of each broadcast and the piano accompaniment to the songs. 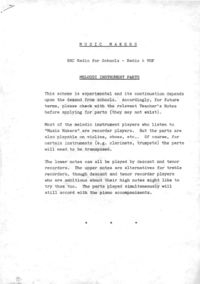 A stapled set of accompaniments to each song for tuned percussion instruments was available free to schools sending a stamped addressed envelope to the producer during the term of broadcast.

Music Makers units, especially those in the autumn and spring terms, were often also accompanied by an acting script adapted for school performances of the musical story. No such script was made available for Peregrine's Progress, a summer term unit, with the teachers' notes explaining that "the story has been designed primarily as a radio entertainment, so no acting scripts are available for distribution to schools.

Share
Retrieved from "https://www.broadcastforschools.co.uk/mediawiki/index.php?title=Music_Makers_(radio)/Peregrine%27s_Progress&oldid=50529"
Categories:
Cookies help this website deliver its services. By using these services, you agree to the use of cookies.
History
Browse propertiesCite this pagePage informationPermanent linkPrintable versionSpecial pagesRelated changesWhat links hereRecent changes