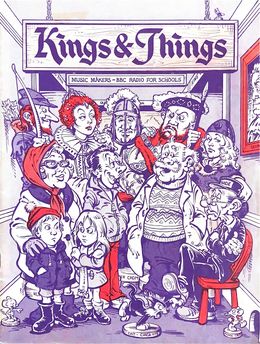 Previous unit: There Was This Man... Next unit: Great Uncle Battersby's Invisible Force

Kings and Things is a unit of the BBC schools radio series Music Makers from the 1970s and 1980s, covering music for primary and secondary school pupils.

A "revue-style anecdotal entertainment" in which a selection of English monarchs and other historical figures at a waxworks come to life and sing songs about themselves. 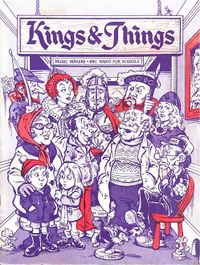 A 28 page pamphlet, illustrated by Paul Cemmick, containing words and music of all the songs, cartoons filling in the basic story, and pictures to illustrate the magazine sections of the programmes.

The teachers' notes contained an overview of the series, lists of the content in each programme, and piano music for all of the songs.

An acting script for the story was available free to schools, directly from the producer during the term of broadcast.

Music Makers units often also had a set of accompaniments for melodic instruments, but no such accompaniments were made available for Kings and Things.

Share
Retrieved from "https://www.broadcastforschools.co.uk/mediawiki/index.php?title=Music_Makers_(radio)/Kings_and_Things&oldid=50555"
Categories:
Cookies help this website deliver its services. By using these services, you agree to the use of cookies.
History
Browse propertiesCite this pagePage informationPermanent linkPrintable versionSpecial pagesRelated changesWhat links hereRecent changes