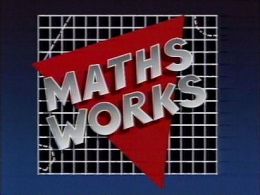 Mathsworks is a BBC schools TV series from the 1990s, covering Mathematics for primary school pupils.

What would happen if children weren't taught maths in school, but still needed to use it in their everyday lives? The sometimes ingenious dramas, animations and documentary sequences in this series show kids working out for themselves how to solve problems such as measuring the area of a lawn, and estimating how much money they have to spend.

All of the dramas and other sequences were produced in America in 1985 by the Agency for Instructional Technology for a series called Math Works. The BBC selected eight of the AIT's 28 episodes which were relevant to the maths National Curriculum, and added new theme music and new studio sequences with Canadian actor Adam Henderson to explain the problems and how to solve them. Adam also explained some of the American concepts used in the films for British viewers, especially in the episode about estimation, which uses American money and the concept of sales tax.

No credits were ever given for the actors in the drama sequences, or those responsible for the animations. 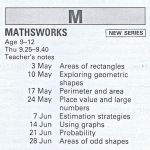 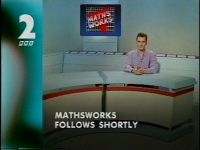 The first broadcast of this series in Summer 1990 had been advertised for Thursdays at 9:25am beginning on 3rd May. The series was broadcast in this slot, but there were also earlier transmissions on Monday lunchtimes (except on 7th May, which was the May Day holiday). Several changes were made to the summer 1990 BBC schools TV schedules between the wallchart timetables being issued to schools and the programmes actually going out - and I'm not really sure why! 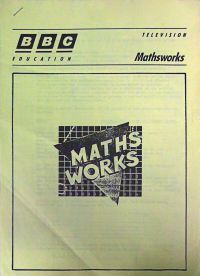 Photocopied teacher's notes written by Julie Cogill were issued to accompany each broadcast, detailing the programme contents and with pupils' worksheets.

Schools broadcasting teacher's notes often included solicitations for feedback from teachers who used the series, but in these notes the request was even more prominent than usual. It was explained that "using a broadcast resource from another country is a new venture for the BBC and we would be very interested to know of your views on this series."[1]

Although a new Maths Works title sequence was created for these UK programmes, the logo used on the front of the teacher's notes is actually the American Math Works logo with an extra "s" added to it - you can tell that the two words are not lined up properly, and the outlines of shapes on the background grid are much thicker than the shapes used in the real Maths Works title sequence. The same off-centre logo is used in the studio behind Adam Henderson's desk.

Share
Retrieved from "https://www.broadcastforschools.co.uk/mediawiki/index.php?title=Mathsworks&oldid=48065"
Categories:
Cookies help this website deliver its services. By using these services, you agree to the use of cookies.
History
Browse propertiesCite this pagePage informationPermanent linkPrintable versionSpecial pagesRelated changesWhat links hereRecent changes