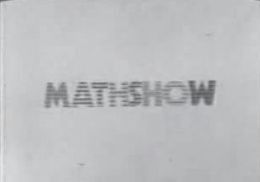 Mathshow is a BBC schools TV series from the 1970s, covering Mathematics for secondary school pupils.

A series emphasising mathematical concepts through comedy sketches and animation, with plenty of regular characters. The programmes firmly set out to provide "mid-morning humour" in hopes that this would help pupils remember the rules and techniques that were demonstrated, which were a mixture of the traditional (number sequences, multiplication and division) and "modern maths" (probability, maps and coordinates) - one clear topic per episode.

The teacher's notes warned that "some of the programmes show scenes of explicit mathematics," but teachers using the series would probably be most concerned about how to settle down their classes to normal work after watching a comedy programme in the middle of morning lessons. The producer once challenged teachers: "Are you brave enough to use Mathshow?"[1]

The title of the series was all one word and the cause of some confusion - do you pronounce it "Maths-How", like knowhow, or "Math-Show" using the American expression 'math'? More fun was had with the title during the programmes, for example with the character Professor MOTHWASH, and the Square and Triangle who often mused HM, SO WHAT. One preview announced it as "a series with a title likely to provide the only problem for teachers."[2]

The series had its own announcer, generally seen at the beginning and end of each episode, and featured fake news announcements and adverts. The end credits were often integrated with the mathematical theme of the episode in some way, for example appearing in a rectangle whose coordinates have to be calculated, or being reflected, rotated and tessellated. 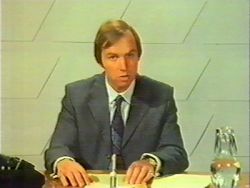 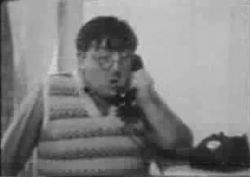 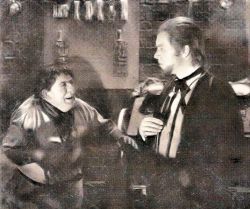 Recordings of all 14 episodes of the series seem to have been kept by the BBC.

Two of the episodes were revised for repeats from 1976 onwards as noted below, but there is only one version of each episode listed in the BBC archive catalogue. I don't know for sure whether these are the original or the revised versions, but it is worth noting that the version of episode 2 (which had one sketch removed in 1976) listed in the archive catalogue is about 1 minute shorter than the other episodes[3].

The series was designed to be shown fortnightly throughout the school year, with five episodes in the autumn term, five in the spring, and four more in the summer. For most of the run episodes were shown first on Tuesday morning at 9:58am, and then repeated in the following week on Thursday morning at 10:25am. Different programmes - including Out of the Past and Near and Far - were shown in the same slots in the intervening weeks.

Mathshow was broadcast every year from 1975-76 to 1979-80, a total of five years, which is a longer life than had originally been envisaged for the series. The actors' contracts had to be extended by one year to allow the repeat run in 1979-80, and a BBC report in 1979 reported that "it is unlikely that a further extension would be granted."[5]

In autumn 1980 the series was effectively replaced by a spin-off, Maths File, featuring the further adventures of Newton of the Yard.

Watch a clip on YouTube. Two short, black-and-white clips from broadcasts of the series in Australia have been uploaded to YouTube. These clips are the source of some of the images on this page. The first contains the Doctor Where sketch, and Dai's final dilemma, from the end of episode 11 A Likely Story

Watch a clip on YouTube. The first few sketches from the beginning of episode 12 Place Your Order, plus the end credits 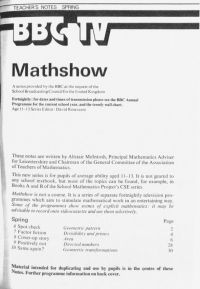 Extensive booklets of teacher's notes were published to accompany the series.

Containing 32 pages per term they gave full, scene-by-scene descriptions of each episode (which form the basis for the episode guide above) without giving away too many of the jokes and plot twists, and extensive mathematical background notes and suggestions for classroom follow-up work.

In the middle of each notes booklet there were worksheets that could be copied in schools and given out to pupils. One of the worksheets in the summer term notes was a revision quiz to see whether viewers could remember the topics covered by the autumn and spring term programmes.

The notes were written by Alistair McIntosh, "Principal Mathematics Adviser for Leicestershire and formerly Chairman of the General Committee of the Association of Teachers of Mathematics."

There were no separate pupil's booklets or other resources.

Share
Retrieved from "https://www.broadcastforschools.co.uk/mediawiki/index.php?title=Mathshow&oldid=48061"
Categories:
Cookies help this website deliver its services. By using these services, you agree to the use of cookies.
History
Browse propertiesCite this pagePage informationPermanent linkPrintable versionSpecial pagesRelated changesWhat links hereRecent changes