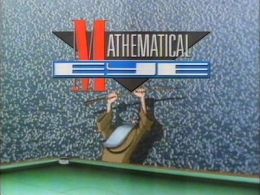 Mathematical Eye is an ITV schools TV series from the 1980s and 1990s, covering Mathematics for secondary school pupils.

A practical mathematics series encouraging children to look at the world with a "mathematical eye" - in other words to see the application of maths in real-world situations.

The series presented film of mathematical problems, and then showed children in the classroom working on solving the problems - such as how much space one person needs on a beach (Area and Volume), where to put the stagger lines on an athletics track (Circles), and how much concrete is needed for a driveway (Measurement).

The Decimals episode featured the adventures of Joe Decimal - not a private eye but a Mathematical Eye - whose clients suffer from "decimal blindness" and other place-value related problems.

Episodes added to the series in later years such as Paper Engineering and Fun and Games were meant to extend the excitement of maths for pupils.

The series was designed for video recording and showing to pupils in chunks. Each episode was split into four sections, with the commentary bringing up a question for children to investigate at the end of each part. 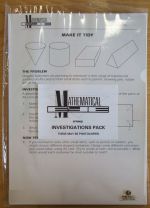 Each term's programmes were accompanied by an A4 booklet of teacher's notes and a pack of pupil investigation sheets.

The notes gave lists of the themes covered in each programme, ideas for discussing each film item in the classroom, and details of the investigation sheets. The sheets were sold separately as an Investigations Pack at £3 for a set of 10 double-sided sheets.

A set of four computer programs, supporting the investigations from the first 10 programmes, was released in early 1989 at £11.50 each or £40.25 for all four. The programs were Mountain Rescue, Codecracker, Fooled by Numbers and Busroute.

A 128-page full-colour book written by Adam Hart-Davis was released to the general public through bookshops in 1989. The book follows the structure of the first 10 television programmes and was designed to be used in conjunction with the TV series. ISBN 0 044 48043 1 Search eBay listings Buy from Amazon

Share
Retrieved from "https://www.broadcastforschools.co.uk/mediawiki/index.php?title=Mathematical_Eye&oldid=48030"
Categories:
Cookies help this website deliver its services. By using these services, you agree to the use of cookies.
History
Browse propertiesCite this pagePage informationPermanent linkPrintable versionSpecial pagesRelated changesWhat links hereRecent changes