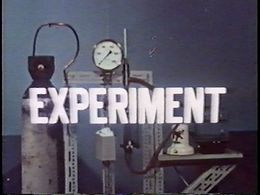 Experiment is an ITV schools TV series from the 1960s, 1970s, 1980s and 1990s, covering Physics, Biology and Chemistry for further education students.

A series which does exactly what it says in the title - each episode is an advanced-level scientific experiment, filmed at Granada TV's local polytechnic and shown on screen either because schools would not normally have access to the specialist equipment needed, or because it would be too dangerous, expensive or difficult for pupils to carry out the experiment themselves.

The films are only part of the overall experience though, and the final results of the experiments are not always shown. Each episode typically involves the equipment being set up and then the experiment being run, with the readings and results shown at length on screen. Viewing pupils are expected to take down the readings - sometimes using their own stopwatch - and then perform calculations using additional information given in the accompanying workbooks to work out for themselves, for example, the charge on the electron or the constant of gravitation.

The producer explained how the series was intended to work:

“Instead of just "reading it up in a book", the student sees and experiences actual experiments as they are performed, extracting and processing the quantitative results which emerge. He must have the appropriate booklet himself (or at least ready access to a copy), and — most important — he will need thorough and careful preparation and guidance from the teacher, who should select in advance those programmes most appropriate for a particular group of students. "Experiment" has been produced as resource material, and it makes considerable demands on both teacher and pupil; if these demands are met, we hope that the effort will prove immensely worthwhile.[1]”

Although one of the most recognisable and ubiqiotous schools TV programmes of the 1970s and 80s (broadcast more than 60 times a year at its early 80s peak, and sometimes twice in the same day), Experiment was also one of the most narrowly-focussed. Designed specifically and only for science classes in sixth forms, the programmes only really make sense when accompanied by the booklet containing calculation details, and so a stray viewer stumbling across an experiment would never gain the full benefits and would likely learn only that they were required to write down a lot of numbers from the TV screen! In fact during the 1970s this series was ITV's only contribution to sixth form study[2].

The series was not directly replaced when it came to a conclusion, but a few years later Channel 4 introduced a series called Science Bank, which similarly used animations and practical demonstrations to demonstrate experiments and concepts which would otherwise be difficult to achieve in the classroom.

Apparatus to measure The Newtonian Constant of Gravitation

The series first presented a set of Physics experiments in 1969, and these core films were shown frequently until 1986.

These 10 programmes, covering 9 experiments, were filmed at Didsbury College of Education, Manchester

, which has since been demolished.

A new set of Chemistry experiments was added in 1975, and repeated until 1992.

These 10 programmes were filmed at the Department of Chemistry and Biology, Manchester Polytechnic 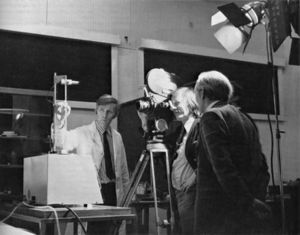 Electrodes attached to the subject of The Physiology of Exercise

Biology experiments were added in 1978. These programmes generally focussed on techniques for scientific investigation, including animal dissection.

This was also a series of 10 programmes, with laboratory-based experiments filmed at the Department of Biological Sciences, Manchester Polytechnic

The fieldwork programmes were filmed on location and made with staff from the School of Plant Biology, University College of North Wales

A Teltron tube used for Ionisation and Excitation Potential

A final set of new Physics experiments was shown in 1986. Originally supplementing repeats of the 1969 episodes, this new unit swiftly replaced them completely, and these were the final films repeated when the series came to an end in 1992.

The 4 experiments were filmed at the Department of Pure and Applied Physics, University of Manchester Institute of Science and Technology

, which has also since been demolished - in fact it is so definitively demolished that even its postcode has been deleted.

The ITV Schools annual programme guide had previewed 5 new episodes to be shown this term, likely to include one on X-ray Crystallography which was never actually made.

The series was filmed in the science departments of Polytechnics, mostly local to Manchester where Granada TV was based. Many of these departments have since moved to new premises and the original buildings have been demolished.

"Write that down!" the gentle voice of Jack Smith would frequently urge viewers, every time a result or reading came up in the course of an experiment. An innocent home viewer stumbling upon the broadcast and not possessing the required booklet would be hard pressed to comply, although at the start of many films an announcement was made along the lines that "for this film you will need a notebook and pencil, and you must be ready to take readings from the screen".

A boiling tube on a blue background indicated by yellow pencil

The aesthetic of the series also sticks clearly in the mind. Equipment was demonstrated against a blue pastel backdrop, and sometimes wrapped in that colour if it wasn't the focus of attention - surely a legacy of the black-and-white televisions that most colleges would have possessed when the series started and the need to create good contrast.

To introduce or demonstrate any equipment a yellow pencil would usually enter the screen and point at the component or direction of travel that viewers need to understand. This hallmark was also present in other series produced by Jack Smith such as A Place to Live, but whereas the yellow pencil was packed away for the later episodes of that other series, it remained firmly in use throughout the entire run of Experiment.

In its Biology unit the series also exposed viewers to the harsh realities of life sciences, when an experiment could be casually and enthusiastically introduced with an explanation such as "we take a freshly killed frog and remove the back legs, then we strip off the skin like this", or "this is the liver from a freshly killed laboratory rat, kept cool on ice", or showing a live locust having its legs removed before being secured to a board for experimentation. Concerns of animal cruelty could perhaps be answered by pointing out that experimenting on one animal on film substitutes for many hundreds or thousands of individual animals being experimented on in individual classrooms.

In the 1960s and 70s the series had a very simple introduction, with a "theme tune" consisting of a sine wave sweeping increasing frequencies, and the title 'EXPERIMENT' shown in block capital white letters against footage of the equipment to be used that day.

A few of the Biology episodes involving fieldwork rather than laboratory work played environmental background sound instead of the "theme tune".

The final four episodes produced in the 1980s have a fully-fledged, though short, animated title sequence and theme tune. Light is diffracted through the word 'EXPERIMENT' which then shimmers and resolves.

All of the Experiment programmes were produced in colour, future-proofed despite very few UK schools possessing colour television sets when the series started in 1969.

All 34 films are safely archived by Granada Television.

The broadcast dates under which the episodes were filed when the Granada archive listing at itnsource.com was available differed from those in the episode list on this page. The final four episodes of the Biology unit had, broadly speaking, their summer term rather than spring term broadcast dates from 1978. This may reveal that those episodes were postponed from their scheduled slots in the spring term and not shown until summer, but this is by no means certain as Granada's archive contains many dating anomalies for programmes from the 1970s and 80s.

The first episode of the Chemistry unit also had its schools broadcast date in January 1975 recorded and not the date of the previous month's preview broadcast.

Each unit was accompanied by an essential booklet containing instructions and additional data to complete the experiments in the classroom. Teachers could either buy one copy of the booklet for their class, treating them as teachers' notes, or ideally a separate copy for each student, treating them as pupils' pamphlets[4].

There was a separate booklet for each unit. The Physics booklet was first issued in 1969 costing 2s 3d, then revised and reissued the following year. When the series reappeared four years later, after decimalisation of UK currency, they cost 18p.

The different unit booklets were sold at slightly different prices, by 1982 for example the Physics booklet cost 85p, Chemistry 95p and Biology £1.

A set of 6 electron micrograph photographs to accompany the first Biology programme were also sold.

In 1970 Granada TV made 16mm copies of the original Physics films available for sale, via Granada International Productions Ltd, and for hire from the British Film Institute Distribution Library.

Later, by 1990, all 34 episodes ever made were released on a set of VHS video cassettes by Guild Sound and Vision Ltd of Peterborough. There were two videos each for the three 10-part units plus a final tape for the 1986 Physics unit, making seven tapes in total, and each video was sold for £35.

The films have also been sold in North America, and as of 2021 the Biology and 10 episodes from the Physics units were available on DVD in North America from Films Media Group.

Share
Retrieved from "https://www.broadcastforschools.co.uk/mediawiki/index.php?title=Experiment&oldid=50059"
Categories:
Cookies help this website deliver its services. By using these services, you agree to the use of cookies.
History
Browse propertiesCite this pagePage informationPermanent linkPrintable versionSpecial pagesRelated changesWhat links hereRecent changes