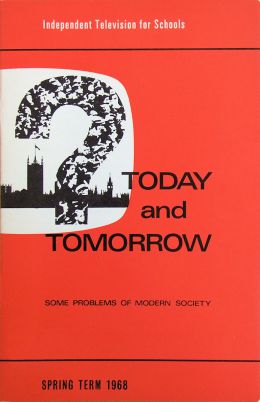 Today and Tomorrow (ITV) is an ITV schools TV series from the 1960s, covering citizenship for further education students.

A documentary series for sixth forms looking at various social problems and policy thought to be particularly relevant to young people. It had the sub-title "Some Problems of Modern Society"

Several episodes used expert speakers, such as Liverpool's Chief Planning Officer to discuss cities, Frank Cousins the General Secretary of the Transport & General Workers Union on incomes, and Asa Briggs Vice-Chancellor of the University of Sussex on universities.

The episode "Who Cares?" was about young people who care about the old, the handicapped and the poor in society. It was devised by members of the Solihull Young Volunteers, and was chosen as ITV's entry for the secondary schools category in the 1968 Japan Prize - in other words it was selected as the best or most prestigious example of an ITV Schools programme from that year. An extract from this episode is held by the South West Screen archive and described in detail on their website.

* - The Population Explosion was previewed for parents and teachers in an Out of School programme during the Christmas holidays on Wednesday 27th December 1967 at 11:50am on ITV.

Episode 10 was also billed as Into the Future in the TV Times for its Friday repeat broadcast (but still as University Life, the title from the teachers' notes, on the Thursday).

The series was never repeated after this term.

Share
Retrieved from "https://www.broadcastforschools.co.uk/mediawiki/index.php?title=Today_and_Tomorrow_(ITV)&oldid=49983"
Categories:
Cookies help this website deliver its services. By using these services, you agree to the use of cookies.
History
Browse propertiesCite this pagePage informationPermanent linkPrintable versionSpecial pagesRelated changesWhat links hereRecent changes