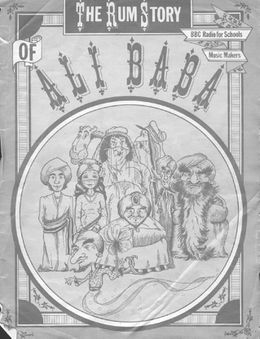 Previous unit: The Everlasting Soldier Next unit: The Choir Outing

The Rum Story of Ali Baba is a unit of the BBC schools radio series Music Makers from the 1980s, covering music for primary and secondary school pupils.

A comic, musical re-telling of Ali Baba and the Forty Thieves.

Ali Baba is charged by the Sultan with marrying off his terribly ugly daughters, for the reward of marrying the beautiful daughter with whom he has fallen in love. He finds his way into a robbers' cave and tricks their Cleaning Genie into letting him steal some treasure, which he uses to try to bribe people into marrying the daughters. The robbers seek revenge on Ali Baba by hiding in large oil jars which are dispatched first to his home and then to the Sultan's palace.

The programmes also have features on "music in eastern countries", including both East Asia and Eastern Europe. 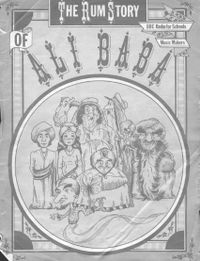 A 28 page pupils' pamphlet illustrated by Peter Clark, with words and music to all of the songs, cartoons telling the basic story, and photographs referred to in the magazine elements of the broadcasts. 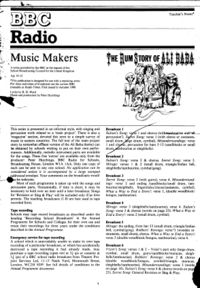 Teachers' notes containing a basic description of the broadcast and piano music for the songs. 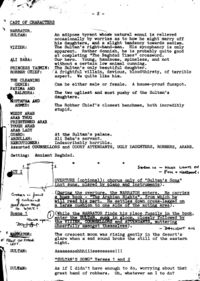 Extract from the acting script

A script of the production adapted for performance in schools, available free to schools from the producer during the term of broadcast. 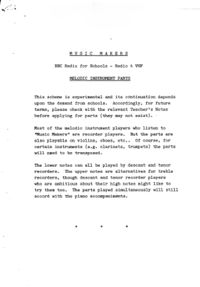 Accompaniments to all of the songs for tuned percussion instruments, also available free to schools from the producer during the term of broadcast.

Share
Retrieved from "https://www.broadcastforschools.co.uk/mediawiki/index.php?title=Music_Makers_(radio)/The_Rum_Story_of_Ali_Baba&oldid=50558"
Categories:
Cookies help this website deliver its services. By using these services, you agree to the use of cookies.
History
Browse propertiesCite this pagePage informationPermanent linkPrintable versionSpecial pagesRelated changesWhat links hereRecent changes