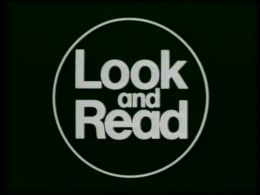 138 images from Look and Read

Look and Read is one of the most treasured and well-regarded schools programmes in Britain. Each term it presented a fully dramatised, thrilling adventure story to be followed by children every week from cliff-hanger to cliff-hanger. Pupils could have the story in book form to read themselves, and in between the dramatised story segments on TV grammatical points would be made by characters related to the story and the funny, floating orange man Wordy. The purpose of all of this was to enthrall children with the adventure story to help encourage them to read first the Look and Read story book and then go on to other books and stories. It was not meant for children who could not read, but for those who were reluctant to read because they were not interested.

All of the Look and Read stories over the years are detailed in the pages below, as are the earlier serials shown in the miscellany programme Merry Go Round, which led on to Look and Read.

This section is slowly being rebuilt from my old website which was just about Look and Read. So far there is basic information about every story, and detailed coverage up to The King's Dragon in 1977. The rest will be restored as soon as possible, but in the mean time you can still read the old website on the Internet Archive Wayback Machine.

The schedules section has records of all previous broadcasts over 40 years!

Here are all the Look and Read stories listed in chronological order.

All of the Look and Read pages copy liberally from my old website about the series, www.lookandread.myby.co.uk, formerly www.lookandread.fsnet.co.uk. This is not plagiarism because it is my own content and I am just moving it here.

There is a large amount of 'behind the scenes' information in this section, which is based on private research but not specifically attributed, in accordance with the wishes of my sources.

Share
Retrieved from "http://www.broadcastforschools.co.uk/mediawiki/index.php?title=Look_and_Read&oldid=47947"
Categories:
Cookies help this website deliver its services. By using these services, you agree to the use of cookies.
History
Browse propertiesCite this pagePage informationPermanent linkPrintable versionSpecial pagesRelated changesWhat links hereRecent changes