Words and Pictures: Up in the Attic 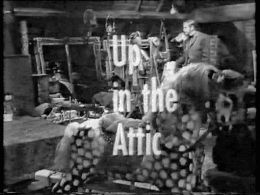 Up in the Attic is a unit of the BBC schools TV series Words and Pictures from the 1970s, covering Language and Reading for primary school pupils.

These first programmes most clearly show the links between Words and Pictures and Look and Read as part of "the continuing contribution (of the BBC) to children's learning to read"[1]. Both series were based on an interesting story for children to follow, including a pamphlet with a simplified version of the story, and extra teaching content to help with typical areas of reading difficulty. Words and Pictures extended this format for slightly young children, by splitting apart the stories ("Programme A") and the teaching content ("Programme B") into separate programmes shown on different days of the week so teachers had chance to do some follow-up work with children in the classroom in between.

Programme A: The Stories

The story begins with the presenter, Gabriel Woolf, looking over an old house which is up for sale. He finds a large attic, empty except for an old-fashioned lamp in the middle of the floor. When he rubs the lamp, wishing that something wonderful would happen, the attic is filled with furniture and toys.

Each week he examines a different set of toys and rubs the lamp wishing to find out about them. This brings the toys to life and they tell a story.

Although each episode is about a different set of toys and different styles of puppets (so that teachers could choose to watch only some of the episodes if they wished, without messing up a serialised story) the various stories do overlap. For example the commander of the toy fort appears in several of the stories before we meet him in episode 6 and discover that he is named General George. The final episode introduces some new characters but it is mainly about all of the toys from earlier coming together when they have to leave the attic.

There was one further chapter printed at the end of the teacher's notes and described as "the final episode of the story". It did not appear in the pupils' pamphlets or any episode listings, so it might not have been dramatised on TV at all and just appeared for teachers to read out to the class after the series had ended. If anybody can remember seeing this story on TV, please get in touch by email. 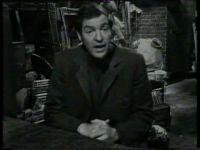 For instance following The Magic Pin, Polly once again tried to build up the wall of her cottage by piecing words together with letters on jigsaw pieces, then blending them together and reading the word. And the Prince and the spy both appeared in the Programme B following their story to pronounce words with inconsistent consonants in different ways.

Reaction to the series

The series, and in particular the story programmes, attracted "unstinted and almost universal praise" from viewing teachers and children.

It was designed for use with carefully selected groups of children from top infants and 1st year juniors classes (6 to 8 year olds), who were able to read, but not as well as they should be able to. In practice it was usually used with whole classes of children watching at once, including those who could not read at all. One Education Officer reported on a "near riot" which took place at a school when only some of the children were allowed to watch the series.

It was also found to be particularly useful for classes of partially or severely deaf children, and children with learning difficulties - an article in the journal Teaching and Training described in great detail the use made of the series in one school for such children, and concluded that it was "of invaluable help to the group."[3]

In all cases it was the series' aim to enthuse children that was most successful - to enthrall them with exciting stories whilst at the same time teaching them the vocabulary they would need to talk and write about the programmes, and helping them with the trickier phonic points of reading and writing.

There were some complaints that some of the stories were too complicated, such as the quite convoluted Boy Without a Name, and The Prince and the Spy where children were relied on to notice the difference between hard and soft pronunciations of 'c' and 'g', they often missed the point.

Complaints were also received by the BBC about the word 'lazy', used in the Lazybones episode to describe one letter in a pair of double consonants. The producer replied with reference to the Pronouncing Dictionary by Daniel Jones. Teachers in some regions enquired about the used of the word 'pot' in Pug's Favourite Things, for the item known locally as a 'pan'. There were also some questions raised about the background music during the programmes, which was distracting to some.

Children wrote in to query the number of humps of dromedaries and camels as portrayed in the programmes, and one child wrote to complain that cats should not be placed with canaries in The Animals in the Ark because "cats eat canaries." The producer "(undertook) in correspondence that the cats for the period of the voyage had promised to do no such thing."[3]

Gabriel Woolf's active role in all the stories was welcomed, as he became "an endearing figure for most". Particularly praised was the fact that the presenter was a man, a welcome feature in schools with mostly female teachers.

Many teachers requested more programmes of the same type, to delve into even more phonic issues. But the biggest problem encountered by teachers had been keeping pace with the weekly programmes, in the days before common use of recording equipment in schools, and doing enough follow-up work to make them worthwhile. There were calls for the programmes to be transmitted fortnightly to allow suitable time. All of these points were considered when the next Words and Pictures programmes, telling the story of Sam on Boffs' Island, were made. 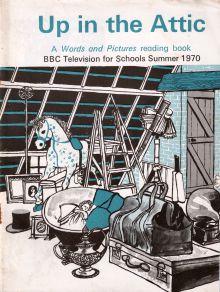 The pamphlets were printed in black and white with some blue colouring, and contained a simplified text of each story, illustrations by Charles Front, space for drawing or colouring pictures and exercises to do with writing or sorting words.

The original pamphlet in 1970 had 40 pages and attracted some criticism - for instance that "children of six need larger spaces in which to write" and that the layout of some pages was too complicated and distracted the children[4]. The entire book was rearranged and subsequent versions had 48 pages, with items more spread out.

Correction slip sent out with the pupils' pamphlets in 1972.

The title of the first chapter, The Animals in the Ark, was wrongly presented as The Animals and the Ark in the pamphlets for both 1970 and 1971, but this was corrected for the 1972 printing. There was a separate problem with the books in 1972 though, as the letters "YELO" were accidentally printed on top of one of the illustrations, and a correction slip had to be distributed to prevent children from trying to read a non-existant word! 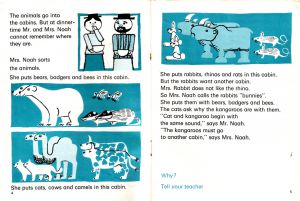 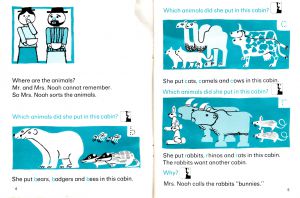 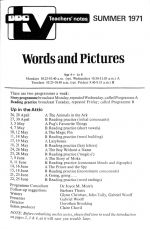 The teacher's notes for the series were extensive - 40 pages to cover just 8 story episodes and (in much less detail) 8 teching episodes.

There was a very detailed version of the story to each episode told, as they would be in the programmes, by the presenter ("guess how I felt when I saw a skeleton sleeping on the rocking horse"; "I rubbed the lamp in the attic and told the dolls what had happened"). This could be read out to children after they had seen the TV programmes, or simply used for reference by teachers.

There were also full word lists for each episode, and many suggestions for follow up work to be done in the classroom, including games such as 'Ark Bingo' and 'Make a Skeleton', activities and oral work. Follow-up suggestions were credited to Barbara Thairs.

The notes were described in teachers' reports to the BBC as "excellent" and "astonishingly good," and note was made of "children 'becoming obsessed' with some of the games."[6] The biggest problem seems to have been that there were so many suggestions for high quality follow-up work that teachers simply did not have time to do all or even most of it.

A Study Unit based on Up in the Attic was issued on the School Broadcasting Council Loan Scheme in 1971 - SBC Cat. No. TV 8. This was to be used by trainee teachers in training colleges only, it was not for use with children in the classroom.

It contained 16mm films of the first Programme A and the first Programme B, both based on the story The Animals in the Ark. This was accompanied by a 40 minute audio recording of the programmes being used with children at a junior school and a filmstrip with photographs of the usage. There were also copies of the pupils' pamphlet and teacher's notes, and a "borrower's guide to the study material".[7]

According to BBC archive catalogue, the only remaining episode from this series is the very first, BBC, which is held complete.

An extract from the first Programme B, covering consonants and featuring the Mr and Mrs Noah from the previous episode, was included in a programme called Celebration and Innovation, shown during autumn term 1993 to celebrate 70 years of BBC schools broadcasting, so at least some of that episode also exists.

I do hope that the BBC archives haven't got mixed up, so that the episode listed in the archive as the first Programme A turns out to actually be Programme B...

In any case none of the later episodes survive as far as I know.

Retrieved from "https://www.broadcastforschools.co.uk/mediawiki/index.php?title=Words_and_Pictures/Up_in_the_Attic&oldid=49238"
Categories:
Cookies help this website deliver its services. By using these services, you agree to the use of cookies.
History
Browse propertiesCite this pagePage informationPermanent linkPrintable versionSpecial pagesRelated changesWhat links hereRecent changes