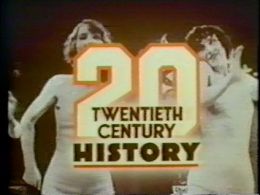 A long-lasting contemporary history documentary series, selecting a dozen or so key periods in the twentieth century (to date) that could be usefully illustrated by television, and covering them using archive film and animated graphics.

The topics were deliberately selected so they would last without needing to be re-made again and they certainly did last far longer than the 3-4 year lifespan of a typical schools programme. After 7 years of constant broadcasts a couple of episodes were updated, and the series then continued unabated for another 5 years of broadcasts, incorporated into the parents series History File.

Then at the very end of the twentieth century in 1999 when secondary schools programmes moved to overnight transmissions, an extra episode was needed to flesh out a unit on The First World War to a full two hours, and the Twentieth Century History episode Make Germany Pay was resurrected to fill the gap. This was then repeated for another 11 years.

So the series, and in particular the Make Germany Pay episode, was used by several generations of schoolchildren over a significant chunk of the twentieth century, as well as the twenty-first!

* - Stalin and the Modernisation of Russia was first shown in a Preview programme at 2:30pm on Friday 27th May 1977.

In 1985 History File was launched as a parent series for BBC TV's secondary school history series, incorporating both Twentieth Century History and British Social History, alongside some new programmes.

At this point the original run of 14 Twentieth Century History programmes (enough to be broadcast fortnightly across the 28 weeks of the schools broadcasting year) was slightly revised into a new set of 15 episodes.

India - The Brightest Jewel, which covered that country in the 1930s and 40s leading up to independence and partition, was replaced by a new episode on The Third World as the 10th episode in the series, looking at the background to problems of third world countries generally.

Israel and the Arab States was replaced by a new programme on The Arabs and Israel Since 1947 as the final episode in the series.

And an additional episode on China Since Mao was added as the 14th episode in the series, to accompany the existing episode on One Man's Revolution, which continued to be repeated alongside it. However due to cultural developments the new episode used the pinyin spelling system and referred to Mao Zedong, whereas the preceding programme in the same series (still repeated unchanged) used the Wade-Giles form and gave a biography of Mao Tse-tung.

These additions and replacements made the series up to 15 episodes, enough to run weekly through one full schools broadcasting term and the first half of the next. 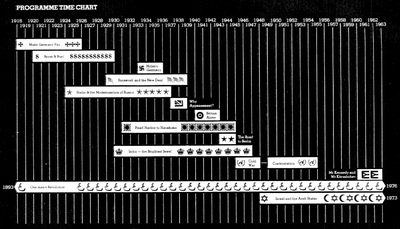 Timeline of programmes in the original 1977-78 series

Revised timeline of programmes in the series from 1985-86

Isolated symbols, images, flags and photographs of twentieth century politics and culture appear in brief flashes to a timpani beat, including a poppy, the dollar symbol and Mickey Mouse. The stylised number 20 and the programme title appear in front of archive film clips.

The music is the beginning of the first movement ('Moderato con moto') of the Violin Concerto, Op. 15 by Benjamin Britten 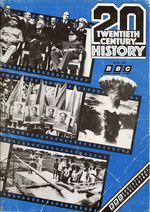 Each year's broadcasts were accompanied by a substantial booklet of teachers' notes, containing lengthy summaries of each episode and some suggestions for preparation and follow-up questions to consider. There was also a section of pupils' worksheets.

The series was also issued on video - principally as a set of 2 video packs covering the entire post-1985 series and accompanied by a reprinted set of the schools' teachers' notes. The episodes of the series were also distributed in the United States as educational films.

A separate textbook was issued alongside the original broadcasts of the series, written by series writer Tony Howarth. The book was recommended in the teachers' notes for background reading and available n paperback and hardback, but was published by Longman rather than the BBC: Twentieth Century History: The World Since 1900. A second edition updated by Josh Brooman was published in 1987. Buy from Amazon 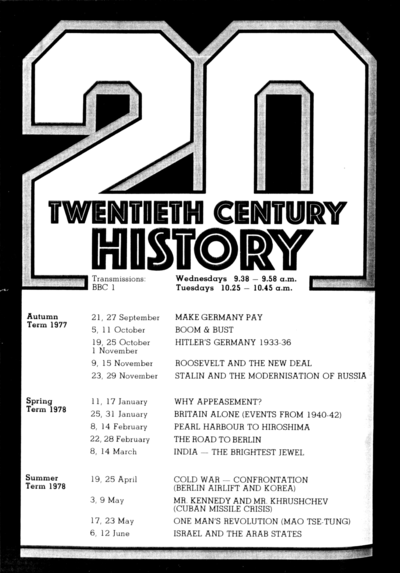 Schedule for the first year of broadcasts

Share
Retrieved from "https://www.broadcastforschools.co.uk/mediawiki/index.php?title=Twentieth_Century_History&oldid=50019"
Categories:
Cookies help this website deliver its services. By using these services, you agree to the use of cookies.
History
Browse propertiesCite this pagePage informationPermanent linkPrintable versionSpecial pagesRelated changesWhat links hereRecent changes