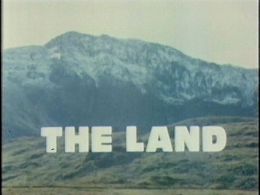 3 images from The Land

The Land is an ITV schools TV series from the 1970s and 1980s, covering geography for secondary school and further education students.

A geography series for GCE O-level and CSE students looking at specific areas of the physical landscape of Britain and man's interaction with it.

The series was influenced by the "new geography" teaching of the 1970s, about "the relationships between one region and another"[1] and their shared characteristics, and human interaction with them, informed by the development of infrastructure and links to urban hubs - rather than isolated studies of a single region as if it was the only place that, for example, dairy farming ever took place.

For this reason the broadcast order of the episodes into units is arranged thematically around four types of area - sea coast, mountains, uplands and river valleys. Teachers seeking a more geographically-aligned study were encouraged to record the programmes and show them to their class in the order that suited them.[2]

Widespread areas of the UK are covered - by no means only local to the Granada Television area - and there are six programmes looking at areas in Scotland and four looking at Wales.

The series' major innovation as a schools' resource in 1975 is that it features extensive location footage, and in particular aerial photography taken by helicopter. But this was at first its undoing. Originally planned to be broadcast in 1974, the national fuel crisis in 1973-74 made it impossible to complete the planned aerial photography, and so the entire series was postponed by a year.[3]

Once they were completed, the full set of 20 films had a long life and much repeat-ability[4], broadcast consistently for almost a decade and taking them well into the 1980s. From 1981 the series continued to be repeated but reduced to one term per year, with a set of 10 episodes selected from across all four units. 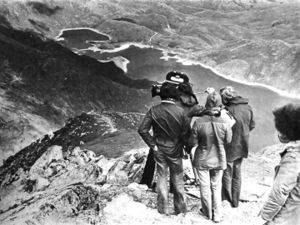 The series was shown first locally in the Granada region, as detailed in the Broadcasts section below, and then across the ITV network two days later. These dates are for the initial, local broadcasts by Granada.

The Land was also broadcast as a Summer School programme for a general audience during the 1977 school summer holidays, on Tuesday mornings at 9:30am.

Some episodes were due to be shown again as part of a similar Summer Break line-up in summer 1979, taking over from It's More Life on Wednesdays and Fridays at 9:45am from 29th August (curiously in a 15 minute timeslot although The Land films are 20 minutes long). However the long ITV strike which started on 10th August and lasted until October meant that these broadcasts never took place. 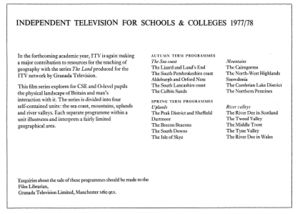 An advert aimed at geography teachers about the 1977-78 broadcasts

A booklet of teacher's notes was available to accompany the broadcasts.

Originally in 1975 a pair of booklets was sold, one for each term costing 22p each. From 1976 onwards the notes were combined into a single publication covering the whole year. In 1976 this was sold for 50p.

The notes contained descriptions of the programmes, suggestions for follow-up work and maps and diagrams including the locations of the filming, although one geography teacher reviewing the series raised a complaint that many geography students must have shared during their years at school - that the locations "were sometimes difficult to find without [Ordnance Survey] maps"![8]

Share
Retrieved from "https://www.broadcastforschools.co.uk/mediawiki/index.php?title=The_Land&oldid=51256"
Categories:
Cookies help this website deliver its services. By using these services, you agree to the use of cookies.
History
Browse propertiesCite this pagePage informationPermanent linkPrintable versionSpecial pagesRelated changesWhat links hereRecent changes