The last of the original Television Club families was its least traditional. There is a son, but his father has died and he lives with his mother and grandfather above a small village shop, and instead of a sister, he has a girlfriend. 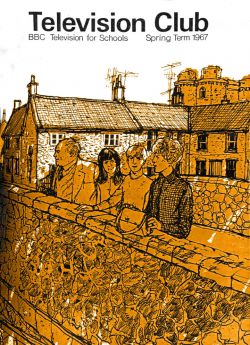 The Barnard family outside their country cottage

Mary Barnard is a widow who lives with her son Peter in the West Country village of Castle Cross, near the busy market town Avonstone. Mary looks ater the village shop and Post Office, while Peter goes to Avonstone Secondary School. Peter's paternal grandfather Sam Barnard comes to stay with the family and works as a freelance feature-writer for the Avonstone Gazette. Sam's investigations for the newspaper provide the subjects for many of the programmes, and it is Sam who tells the story.

Peter's school friend Ann Mortimer completed the main cast of characters. Her father Mr Mortimer, a widower, manages the local stone quarries. Peter is dependable and can look after the shop if necessary, while Ann likes organising things, and her tendancy to bosiness sometimes causes friction between them.

The fictional locations were actually filmed at Nunnery and Frome in Somerset[1], as for the first time Television Club left the urban settings of previous series to give viewers a taste of country life.

Information about all the episodes of Television Club featuring the Barnard family.

The descriptions are based either on episode synopses in the teacher's notes suitably abridged. In some cases I have added extra details about the story from the pupil's pamphlets.

The Archive column includes a link to the free online version of the BBC Programme Catalogue for every episode that is available there. Only 2 out of the 18 episodes appear in the catalogue, it seems that recordings of the rest have not been kept by the BBC.

All Your Own Work

In 1970, during repeats of episodes featuring the Barnard family, Television Club ran a play-writing competition for its audience. Classes were invited to invent their own Television Club family, with a Mum, a Dad, a son, a daughter and up to two additional characters. The action had to be confined to the living room, kitchen/dining room and hall of an ordinary family house.

Schools could submit typed and finished plays (to be adapted by the BBC to meet the requirements of television production), outlines of a good story, or even tape recordings of children's prepared dialogue. Plays had to be submitted by 1 May 1970 in time for the BBC to select the best three plays and mount them with a professional cast in a programme called All Your Own Work, transmitted on 16 June 1970. The new programme was presented by James Lloyd, and produced by the then series editor, Jill Sheppard.

Some possible scenarios were suggested in the teacher's notes:

However I do not know anything about the plays that were actually chosen and produced. If you have any information or recollections, please get in touch by email or on the forum.

As for previous years with the Brents there was a set of teacher's notes and a pupil's pamphlet story book published for each term.

The pupil's pamphlet for the spring term stories (pictured above) had an orange cover showing the Barnards and Ann Mortimer standing together in Castle Cross. The summer term pamphlet had a blue cover showing the group outside the historic castle. Both were told from the point of view of Sam Barnard.