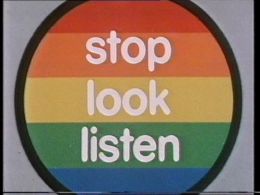 An extremely popular series, originally conceived to provide slices of life, experience and stimulus to children beyond their usual experience and encourage them to literally stop, look and listen at things happening around them.

There is a full, general overview of the whole series below, plus separate pages covering:

During the 1970s, 80s and early 90s almost 200 of these ten-minute films were made by the midlands ITV company ATV and its successor Central TV, looking behind the scenes at factories, shops and safari parks, and the work of the police, hospitals and the fire service.

The majority of the episodes were narrated in jovial and captivating style by Chris Tarrant, and the style of the programme gave it wide appeal. Originally envisaged for 7-9 year old children from deprived areas or holding less interest in what was happening around them, the age range was expanded significantly to include 5-7 year-olds by the mid-1970s, and as the teacher's notes acknowledged, "the story of the banana [...] or the story of what happens to the rubbish collected by the dustman [...] can be interesting to quite old children (or even adults) as well as to younger children."[1]

Every one of these episodes is being documented on this site's pages about series one (1971-72), presented by Harvey Higgins and series two to seventeen (1975-93), narrated by Chris Tarrant and others.

“Not so long ago, a programme like Stop, Look, Listen would have been judged solely on its merits as a piece of educational broadcasting. Now it needs to be measured for fit to the national curriculum.”

Changes came in 1990 following the introduction of the National Curriculum in England & Wales, when general 'stimulus' and awakening children's interests was no longer a sufficient reason to show a programme in the classroom or spend time on a topic. Although broad themes like transport, food and the natural environment had linked consecutive programmes since Stop, Look, Listen began, these were made more overt and explicit with themed units like 'People Who Help Us', 'How Things Work' and 'Then and Now' in place from 1990.

At around the same time producer/director Dilys Howell, who had been with the series since the very beginning, retired and Chris Tarrant moved on as narrator to be replaced by Matthew Kelly and later Bryonie Pritchard, plus others including children presenting individual episodes. Programmes also moved from being made on film to videotape, updating the look and feel of the series.

In 1993 responsibility for schools programmes moved from the ITV companies to Channel 4, and Stop, Look, Listen was completely repurposed as a general topics series for infants, in which form it lasted for another decade. At first this still included some of the traditional documentary programmes in units such as People Who Help Us and How to Find Out, but also a broader range of presenter-led and dramatised programmes.

Stop, Look, Listen was merged with Our World, Yorkshire Television's infants series which in its original form as My World had actually been running since the 1960s, for even longer than Stop, Look, Listen, but had become a similar topic-based series in the early 1990s. In reality this merging amounted to one unit of Our World programmes on How Things Are Made being repeated as part of Stop, Look, Listen, once, in 1993, and Channel 4 only needing to make one instead of two separate infants series from that point forwards.

As a topics series the scope of the programme was expanded significantly, with episodes increased to 15 minutes from spring 1994 and some simpler, shorter episodes aimed at 4-6 year-olds introduced from autumn 1997. Although very wide-ranging, Stop, Look, Listen in this era had a particular line in programmes covering infant religious education (Stories of Faith, Animated Bible Stories, Dottie and Buzz and Water, Moon, Candle, Tree and Sword) and creative arts topics (Music, Magic and Mystery, The Arts Cart, Jack and the Beanstalk and Okey Cokey Karaoke).

The last new episodes were shown in early 2002 then there were the usual repeats until 2006. However the 1997 Animated Bible Stories unit lived on, revived first for a general audience over Christmas 2004 shown amongst Channel 4's early morning childen's programmes, it was brought back again and repeated for schools seven more times between 2007 and 2009.

Beneath the playground noise is the jaunty theme tune, a piece of library music called Cock of the Roost by Don Jackson, performed by the Pandora Orchestra[3]. The music was released on a CD compilation called Girl in a Suitcase in 2001, which is out of print but may still be available from Amazon.

These titles were used for first series (1971-72) with Harvey Higgins, and the second series (1975-76) which was narrated by Chris Tarrant, 54 episodes in total. They continued to be shown when these episodes were repeated and so the last airing was in June 1985. 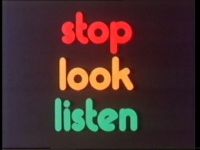 The next title sequence is accompanied by a lively piece of library music called High Life by Tany Turens, played by The New Regency Players[4]. This music was released on a CD compilation called Watch with Teacher in 2008, which is also out of print but may still be available from Amazon.

On a plain black background the words 'stop' in red, 'look' in yellow and 'listen' in green zoom into the screen in time to the flourishes of the music, followed by all three words together.

These titles were used for episodes shown between autumn 1978 and summer 1981, the third, fourth and fifth series, all narrated by Chris Tarrant and a total of 29 episodes. They also continued to be shown when the episodes were repeated, even after the 'ATV' logo at the start had been edited out and replaced with a 'Central' logo, so they were last seen in March 1988. 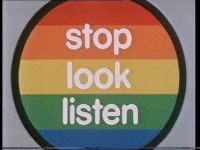 The most ubiquitous title sequence was also accompanied by the High Life theme tune.

A large red circle (suggesting 'stop') moves onto the screen. It gains red, orange, yellow, green and blue stripes and turns into the eye (or spectacles) of a simple smiling face. The other eye is similarly striped, and then the eyes open and the pupils dart around (suggesting 'look'). We move to the face's left ear (suggesting 'listen') which turns into another stripey circle, with the words 'stop', 'look' and 'listen' shown all at once.

These titles were used for episodes shown between autumn 1981 and early spring 1993, a total of 106 episodes mostly narrated by Chris Tarrant, but latterly by Matthew Kelly, Bryonie Pritchard and some children as well. They were repeated until autumn 1993. In that 12 year period Stop, Look, Listen was so ubiquitous with four or even more transmissions per week at its peak that I calculate this title sequence was broadcast approximately 640 times! 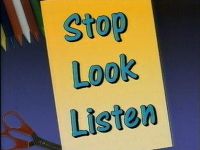 The empty pages from a computer animated scrapbook are seen, and then slowly filled with memorabilia from early 1990s episodes of Stop, Look, Listen (although ironically the traffic light titles were still the ones used on many of the episodes actually covering these topics, which had already been produced before the scrapbook titles were introduced!): a postage stamp showing Penny Farthing bicycles, a ticket to Beamish Living Museum, a photograph of circus performers, a drawing of a sailing boat, a colourful football, an old coin, a stopwatch, an arrow fired from a bow, a butterfly and finally a sheep. The page full, the scrapbook is closed and the words 'Stop Look Listen' appear on its cover. 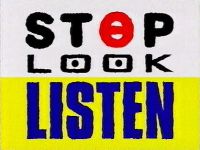 A fast-moving sequence using different styles of animation. Four chattering faces of different colours are revealed to be part of the tapestry to a flying carpet, which moves off into a cloudy sky as the music starts. A clay model of the globe appears and unfurls to show a full world map. A drawn scene of round houses next to a bridge over a river appears, and then fades into a night-time street scene with buildings of many different shapes and styles, and a board bearing the programme title rolls towards us.

The title is set out in animated capital letters, with the 'o' of 'stop' resembling a red stop sign, the 'o's of 'look' having flashing pupils like eyes, and 'listen' set in blue text on a yellow background.

The broadcast history of Stop, Look, Listen up to 1993 is difficult to summarise, since it consisted of well over 100 individual episodes, only very loosely organised into units, with different episodes updated, replaced or re-ordered each year, and during the 1980s there were two parallel sets of broadcasts each week!

Nevertheless the table below is an attempt to convey the series history in some meaningful way. Each row represents a year of broadcasts (or, from 1983-1987, one of two parallel Sets of broadcasts) and each column is a week - the first 10 weeks are the autumn term, the next 10 spring and the final 10 the summer term. Episodes are shown in bold on their first appearance. The table is very wide and will need to be scrolled across.

Details including a full description of each episode, broadcast dates, previews for teachers, filming locations and the sequence of replacements can be found on the individual pages for series 1 and series 2-17.

From 1993 the series was organised into distinct units:

The following summary credits follow the series through to the end of the ITV Schools era in 1993. From 1993-2002 the series was arranged into units with separate production companies, and credits for those units will be added if this site ever gets round to creating pages for the individual units.

To help children to understand the subject of each episode the film shows all of the activities involved. For coal miners this includes undressing and showering off all of the dirt and dust at the end of the day, with the camera focussed just high enough to protect their modesty. the episode is available to watch online at the BFI. Showering miners was a popular category of footage for schools programmes in this era, also used by Making a Living in 1979 and My World in 1982[5].

Some of the simple dialogue used, taken separately from the perfectly innocent visuals, could have second meanings for the prurient-minded. For example Chris Tarrant's description of the tribulations in a butcher's life: "the butcher's wife uses a wooden stick to push the meat down the hole." This is of course in relation to sausage making. The Café episode (more on which below) explains that one of the venue's attractions is the female co-owner's "big pork baps"[6]. This is of course in relation to big pork baps.

Meanwhile in real life, the male proprietor who was subject of the Café episode was later revealed to be a "drugs mobster" and "underworld cocaine kingpin"[7] who was caught smuggling drugs into England, fled to South America, and latterly resided in a Panama jail. The episode wasn't repeated after its initial pair of broadcasts in October 1990.

The 1992 Weather episode was presented, in-vision, by Fred Talbot, a TV weatherman who was later convicted of historical sexual offences against children. The episode also wasn't repeated after its initial broadcasts in 1992.

(It is somewhat misleading to refer to these episodes never being repeated as if it had anything at all to do with the real-world controversies, which were not uncovered until years later anyway. In fact a number of Stop, Look Listen episodes made between 1990 and 1993 were only shown once and then revised or withdrawn, as the series adapted to the National Curriculum and company changes (and anyway the Weather episode was repeated, just in the autumn of the year it had debuted in the spring).)

Share
Retrieved from "https://www.broadcastforschools.co.uk/mediawiki/index.php?title=Stop,_Look,_Listen&oldid=49764"
Categories:
Cookies help this website deliver its services. By using these services, you agree to the use of cookies.
History
Browse propertiesCite this pagePage informationPermanent linkPrintable versionSpecial pagesRelated changesWhat links hereRecent changes