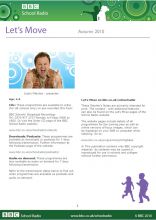 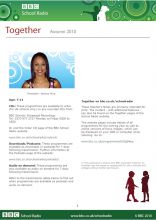 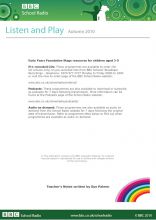 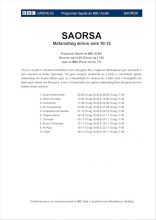 Programmes ran from Tuesday 21st September to Friday 3rd December 2010, with no broadcasts in the week beginning 25th October. Broadcasts were between 3:00am and 4:00am on BBC Radio 4 Digital.

There were new episodes of Playtime, Stimulus Sounds, Something to Think About, Time to Move, and the two series produced in Scotland.

Scotland's topic-based schools radio series had used the titles Scottish Resources 7-9 and Scottish Resources 10-12 since 1990. In 2009-10 BBC Scotland seemed to abandon the concept of umbrella series titles and put out units of programmes without an overall title - the radio programmes were nebulously referred to as "First/Second Level Scottish CfE" and "Second/Third Level Scottish CfE" in schedules, and as "programmes from the first to second level of the Scottish Curriculum for Excellence" (and so on) by continuity announcers (this website continued to refer to them by the previous series titles for convenience). This year the slightly-less-clumsy Scottish Learners Early/1st Level and Scottish Learners 2nd Level seem to have been adopted as series titles. These series consist of entirely new episodes this term, including some radio programmes based on the Cbeebies TV series Nina and the Neurons Go Inventing.

The BBC School Radio website was revamped this term so that programmes could be heard online via the central BBC iPlayer site, replacing the previous reliance on RealAudio streams. Additionally, the series Listen and Play, Something to Think About, Playtime, Time and Tune, Let's Move, Music Workshop, Time to Move, Together, Scottish Learners Early/1st Level and Scottish Learners 2nd Level were available as podcasts, and each podcast episode was now available for 30 days (in previous terms they had only been available for seven days following transmission). All episodes of A Christmas Carol and most of the content from Stimulus Sounds and Britain Since the 1930s were available on the School Radio website for streaming on-demand at any time.

On Thursdays only 55 minutes worth of schools programmes were scheduled to fill the 60 minute timeslot from 03:00-04:00. The extra time was filled by playing songs from some of the term's music & dance programmes in between programmes, or (for example on Thursday 2nd December) playing the entire school radio theme music through twice!

Schools television programmes ran from Tuesday 5th October to Friday 26th November 2010, with Languages & Travel programmes for adult/home learners in the weeks beginning 26th October & 2nd November. Broadcasts were mostly between 4:00am and 6:00am in the "Learning Zone" strand on BBC2, in the early hours of Tuesday, Wednesday, Thursday & Friday mornings. This means that with just 6 weeks of schools programmes, there were a total of 48 hours of schools TV broadcasts in this entire term!

Other highlights included a repeat of Talkie Time with Rodd Christensen (19th October) and the first two Barnaby Bear units from Watch (16th November). Many of the recent series about Charles Darwin were repeated on 23rd & 24th November to coincide with the anniversary of the first publication of On the Origin of Species, and the History File unit on The First World War was repeated on 10th November, preceeding Armistice Day on 11th November. This History File unit includes the superb first episode of Twentieth Century History, originally shown in autumn 1977.

The History File unit on Nazi Germany was shown on the morning of Thursday 11th October (replacing a planned broadcast of the Britain 1500-1750 unit). There were concerns about broadcasting programmes on the subject of Nazi Germany immediately before the start of the pre-school Cbeebies programmes at 6:00am, and so the History File episodes were moved to the earlier-than-usual time of 3:00am to 5:00am. By lucky coincidence, the film Some Dogs Bite, commissioned by BBC Learning, was scheduled to be broadcast in primetime on BBC Three at 9:00pm on the previous evening, so the hour between 5:00am and 6:00am was filled with a half-hour programme on The Making of Some Dogs Bite, and the second Blast compilation special.

Concerns about the suitability of programmes leading into Cbeebies at 06:00am also caused a schedule change earlier in the term. It had been planned to broadcast the Scene drama Spit Game at 05:30am on the morning of Thursday 21st October. Spit Game is aimed at older teenagers and includes swearing, some potentially distressing medical scenes and, near the end of the episode, two obscene gestures! The programme has been broadcast at 5:30am in the past, including its first broadcast in autumn 2005 (although the children's programmes did not start until 7:00am at that time), but last time it was lined up for that slot in autumn 2008 the schedule was changed at the last minute. On this occasion the Scene programme was dropped altogether and replaced with a repeat of Caught in the Web, the Newsround Special about online grooming.

Both series were available to view on the BBC iPlayer for seven days following their original broadcast.