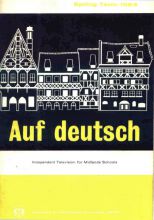 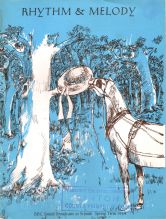 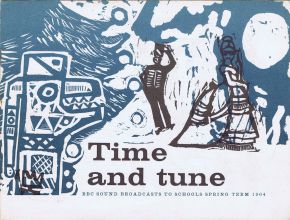 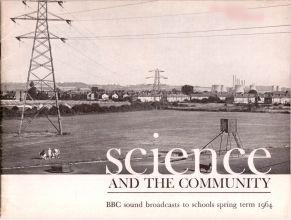 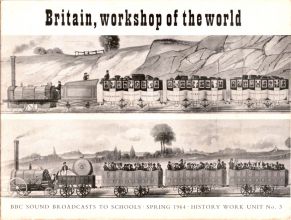 Programmes ran from Monday 13th January to Friday 20th March 1964. There were no half term repeats, so there were a total of 10 weeks of broadcasts.

Advert for the first Radiovision broadcasts

The first formal Radiovision broadcasts in Britain took place this term, with the Radiovision Experiment broadcast on Thursday mornings for six weeks (after the six weeks were up, Music While You Work was broadcast in that slot, instead of more schools programmes).

"Radiovision" basically describes a radio broadcast which is accompanied by pictures - distributed to schools as either an 8mm filmstrip (initially costing 30 shillings) or, later, a set of slides. The radio programme gives a commentary on the slides and use them as a visual aid, for example "(look at) this dartboard. Can you see the curved lines? They're called circles," or "if you had X-ray eyes, this is what you could see inside that lady's tummy. A young baby, just about ready to be born."[1] There are also teacher's notes which give the full script of the broadcast, frame by frame, to indicate when to turn to the next picture. Although it was possible to view the pictures while the radio programme was being broadcast, it was always recommended to tape record the programme and play it back later - this explains the decision to broadcast the experimental radiovision programmes from three different series on different subjects, Looking at Things, Geography and History Work Units, in the same timeslot this term, which could normally by expected to present insurmountable timetable difficulties for schools.

Radiovision allowed teachers to have a level of control over their lesson's content that they could never have with schools television in the days when TV could not be recorded and had to be viewed as it was broadcast. A pupil who took part in some of the BBC's pilot experiments with radiovision before the broadcasts began said "it was much better than an ordinary film because you had longer to study the picture. You look at a moving film and then... it's gone!"[2] Radiovision filmstrips were also always in full colour, while it would be another decade before full colour came to BBC schools television. This term's Geography radiovision broadcasts took particular advantage of this - the programmes concerned England's oolithic limestone belt and concentrated on the different coloured layers of rock in ore workings.

Formal radiovision first started in France in the 1950s. It was taken up by other countries - including the Netherlands and especially by Sveriges Radio in Sweden which always had a close relationship with the BBC Schools department - and demonstrated at an educational broadcasting conference held in 1961 where it was observed by the BBC. The first BBC radiovision broadcast was Courtship and Marriage in Painting in the series Looking at Things, on 16th January 1964 - an experimental programme using dramatised stories of courtship and marriage to invoke the paintings displayed on the filmstrip[1] and suggest "the dreams the artists had before they painted their pictures". Teachers could then go back through the filmstrip describing the boring "historical and artistic context" of each picture if they wished[2].

There were more radiovision programmes in spring and autumn 1965, before radiovision became a regular part of the BBC's offering to schools from 1966-7. It then continued successfully for over 20 years, and later on radiovision packs were sold to schools containing cassettes and filmstrips so the broadcast component became less necessary. The BBC's last radiovision broadcasts were for the series Looking at Nature: Science Naturally and GCSE Drama Resources in the summer term 1990.

Broadcasts on BBC Television (there was still officially only 1 BBC television channel).

Programmes from the Welsh transmitters, Holme Moss and Sutton Coldfield.

Other regional variations - if there were any - not known.

Programmes ran from Monday 13th January to Friday 20th March 1964, giving 10 weeks of schools broadcasts with no repeats for half term. Engineering Science, a series for colleges, resumed its run from the autumn term on Tuesday 7th January.

Broadcasts to London and the South East of England.

Granada billed their schools programmes with slightly different start times from the rest of the country, both in the Northern edition of the TV Times and in newspaper listings. For instance on Mondays the schools programmes in London and other areas started at 2:35pm, 3:04pm and 3:26pm. But Granada billed these same programmes as starting at 2:35pm, 3:00pm and 3:25pm. I believe that this is simply a case of Granada billing the programmes with 'neat and tidy' start times at five-minute intervals instead of the more accurate to-the-minute timings used elsewhere, and that in fact the programmes probably did start at the same time throughout the country.

Schools programmes were carried by most, if not all, of the other ITV broadcasters too: Anglia, TWW (Television Wales & the West), Teledu Cymru (Wales West & North Television), Westward, Southern, Tyne Tees, Scottish, Grampian and Ulster Television. I am not certain whether Channel Television and Border Television carried them this term[3].

Going by bare-bones newspaper listings, I believe the ATV programmes shown during the 1pm hour each day were also taken by TWW and Teledu Cymru, but other regional companies began their school broadcasts around 2:30pm.

Schools programmes to be shown during the spring term (and one repeat from autumn 1963) were previewed during the 1963 Christmas holidays for the benefit of teachers and parents. Schedules were different in each region according to the programmes scheduled to be shown in the spring. I only know the schedules for Associated-Rediffusion in London and ATV in the Midlands:

The Out of School programmes began at 14:30 each day and continued until around 15:30.