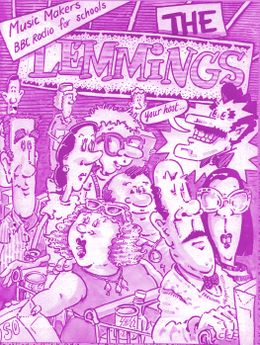 Previous unit: A Midsummer Nightmare Next unit: The Park Keeper (1987)

The Lemmings is a unit of the BBC schools radio series Music Makers from the 1980s, covering music for primary and secondary school pupils.

The Lemming family are compulsive consumers, constantly filling their shopping baskets with the latest goods and waiting for sales reps to fill them in on popular trends. The Lemmings' behaviour drives them onto a general knowledge TV game show, and drives their nephew Leo to the Society for Keeping Everything More or Less Always the Same.

The magazine and Quiz Time segments of the broadcasts concern the need to make things bigger, better and more expensive, and how music has been affected.

The Lemmings was never repeated after its initial broadcast in 1985. It would have been due for a repeat in summer 1987, but a new production of The Park Keeper was put on instead. 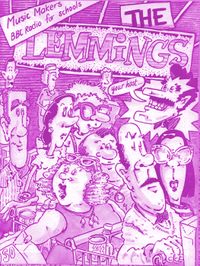 A 24-page pamphlet printed in pink, telling the story of The Lemmings with illustrations by Anni Axworthy, and words and music to all the songs. 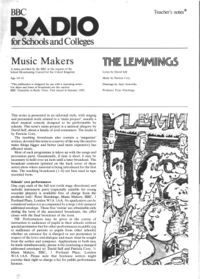 A 16-page booklet containing piano accompaniments to all of the songs and notes on the content of each broadcast.

A script for schools to mount their own production of The Lemmings was available free to schools from the producer during the term of broadcast...

... as was a set of tuned percussion accompaniments for each song.

Share
Retrieved from "https://www.broadcastforschools.co.uk/mediawiki/index.php?title=Music_Makers_(radio)/The_Lemmings&oldid=50536"
Categories:
Cookies help this website deliver its services. By using these services, you agree to the use of cookies.
History
Browse propertiesCite this pagePage informationPermanent linkPrintable versionSpecial pagesRelated changesWhat links hereRecent changes