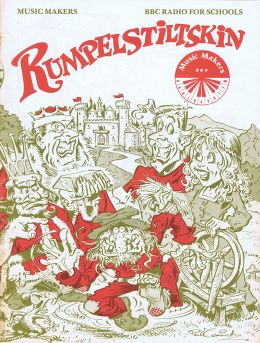 Rumpelstiltskin is a unit of the BBC schools radio series Music Makers from the 1980s, covering music for primary and secondary school pupils.

A musical adaptation of the Brothers Grimm story. A miller's drunken boasts lead to his daughter Ethel being imprisoned until she can spin straw into gold. A dwarf with magical powers comes to her aid, but to meet her debt to the dwarf Ethel will have to marry him unless she can guess his name. The handsome footman Albert rides to her rescue.

This production was an updated and refreshed version of a Rumpelstiltskin production originally broadcast on the companion series for slightly younger children Music Workshop in 1978 and 1980, with most of the same songs but a new opening number.

There was also music for an Interlude and Wedding March. 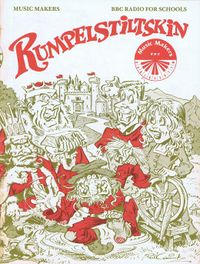 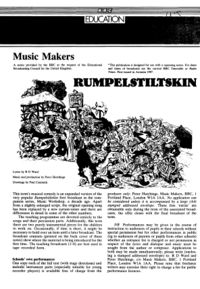 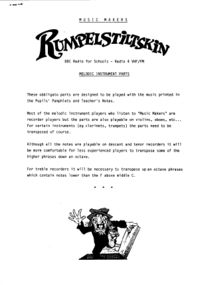 Share
Retrieved from "https://www.broadcastforschools.co.uk/mediawiki/index.php?title=Music_Makers_(radio)/Rumpelstiltskin&oldid=50560"
Categories:
Cookies help this website deliver its services. By using these services, you agree to the use of cookies.
History
Browse propertiesCite this pagePage informationPermanent linkPrintable versionSpecial pagesRelated changesWhat links hereRecent changes