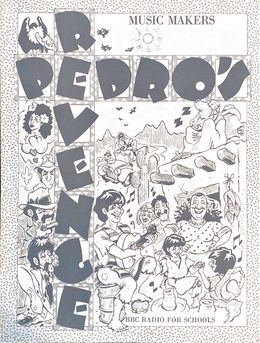 Previous unit: Crossed Circuits Next unit: Gone with the Wiz!

Pedro's Revenge (1984) is a unit of the BBC schools radio series Music Makers from the 1980s, covering music for primary and secondary school pupils.

An adaptation of a story from South America, using South American music styles. Young Pedro encounters the gangster Rocadura who "liquidated" his father years ago. Through a series of wily tricks Pedro repeatedly outsmarts Rocadura, and even after being captured, Pedro continues to seek his revenge.

The magazine sections of each programme looked at aspects of Latin American music.

Pedro's Revenge was produced again for Music Makers later in the 1980s, in an expanded form as a spring term series. That later version of the story is covered on a separate page of this website.

Pedro's Revenge would have been due for a repeat in Summer 1986, but Music Makers was not broadcast in that term. Its place was taken by Opus, a short series for secondary schools about musical works composed and performed by pupils. 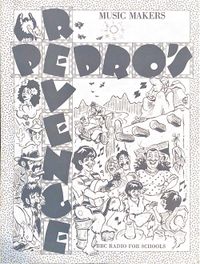 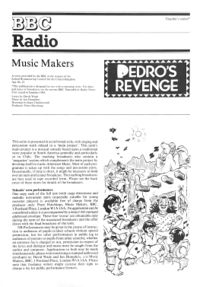 An acting script, including dialogue and stage directions, specially adapted for school performances, was available free to schools who sent a stamped, addressed envelope to the producer during the broadcasts...

...as was a set of musical notation for tuned percussion instruments.

Share
Retrieved from "https://www.broadcastforschools.co.uk/mediawiki/index.php?title=Music_Makers_(radio)/Pedro%27s_Revenge_(1984)&oldid=50532"
Categories:
Cookies help this website deliver its services. By using these services, you agree to the use of cookies.
History
Browse propertiesCite this pagePage informationPermanent linkPrintable versionSpecial pagesRelated changesWhat links hereRecent changes