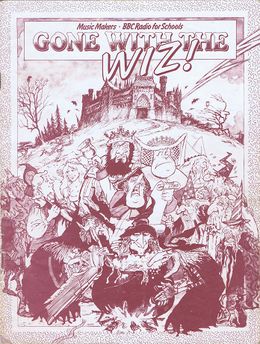 Gone with the Wiz! is a unit of the BBC schools radio series Music Makers from the 1980s, covering music for primary and secondary school pupils.

Seeking to help his awful King to cure a princess's uncontrollable laughter, a peasent named Egbert suggests that Wizard Wheeze could cure her with magic. The wizard having no idea how to do this prompts a race to the cure between wizards and witches with Egbert going undercover disguised as a witch.

The magazine sections in each programme look at music inspired by "things magical and fantastic". 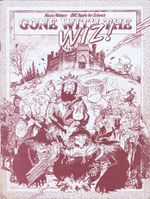 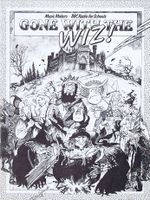 A 28 page pamphlet with illustrations by John Shackell, containing the words and music to the songs and a cartoon version of the story.

In 1984 the pamphlet was printed in shades of dark red, and in 1986 it was reprinted in black and white. 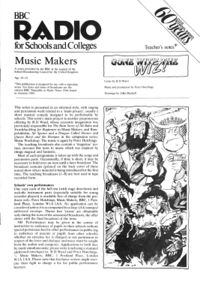 A 16 page booklet containing the piano accompaniment to the songs and an outline of the contents of each broadcast.

A script of the performance adapted to be performed in schools was available free from the producer during the term of broadcast...

...as was a set of accompaniments for tuned instruments.

Share
Retrieved from "https://www.broadcastforschools.co.uk/mediawiki/index.php?title=Music_Makers_(radio)/Gone_with_the_Wiz!&oldid=50534"
Categories:
Cookies help this website deliver its services. By using these services, you agree to the use of cookies.
History
Browse propertiesCite this pagePage informationPermanent linkPrintable versionSpecial pagesRelated changesWhat links hereRecent changes