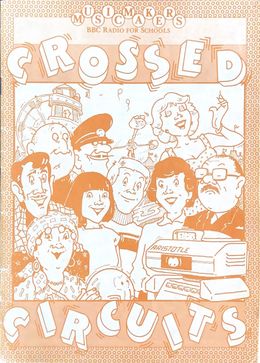 Crossed Circuits is a unit of the BBC schools radio series Music Makers from the 1980s, covering music for primary and secondary school pupils.

A comedy about a young man trying to free himself from a life of automated "micro-chippery".

Faraday Filigree is the son of the multi-millionaire owner of Filigree Electronics, and has been brought up by machines, with no contact with other humans. Yearning for human contact he leaves home and meets a girl called Sally who works for the travelling fair. This soon ties him up in the crooked schemes and scams of the fair's owner Hercules Flybanite.

The magazine sections looked at "musical things which were New at the time".

A 28 page pamphlet for children printed in shades of orange, containing the story told in illustrations by Derek Mathews, and words and music from all of the songs. 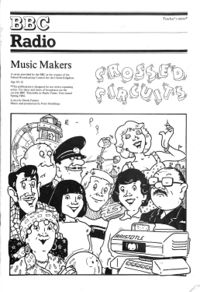 A 16 page booklet for teachers containing the piano accompaniment for all of the songs over 14 of the pages, and brief descriptions of the broadcasts at the end.

A script of the story adapted for performance in schools could be requested by schools sending a stamped, addressed envelope to the producer during the term of broadcast.

A set of melodic instrument parts for all of the songs was likewise available free from the producer while the programmes were being broadcast.

Share
Retrieved from "https://www.broadcastforschools.co.uk/mediawiki/index.php?title=Music_Makers_(radio)/Crossed_Circuits&oldid=50531"
Categories:
Cookies help this website deliver its services. By using these services, you agree to the use of cookies.
History
Browse propertiesCite this pagePage informationPermanent linkPrintable versionSpecial pagesRelated changesWhat links hereRecent changes