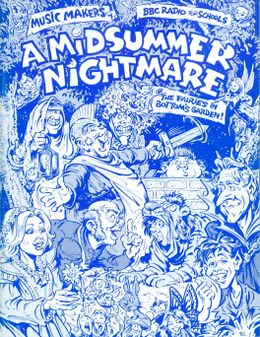 Previous unit: Gone with the Wiz! Next unit: The Lemmings

A Midsummer Nightmare is a unit of the BBC schools radio series Music Makers from the 1980s, covering music for primary and secondary school pupils.

A group of tradesmen plan to put on a play with local weaver Nick Bottom, who is convinced of his acting prowess, in the lead role.

They rehearse in an enchanted wood where the king of fairies is plotting to make the queen fall in love with the first creature she sees. Mischievous fairy Puck interferes by giving Bottom the head of a donkey, and things get complicated when the half-Bottom half-donkey is the first creature seen by the fairy queen.

The story is a comic adaptation with songs of a significant part of the plot to Shakespeare's A Midsummer Night's Dream, just without the four lovers storyline. It is subtitled or The Fairies in Bottom's Garden!

A 48-page pamphlet printed in blue, with illustrations by Paul Cemmick telling the story, and words and songs of all the stories. 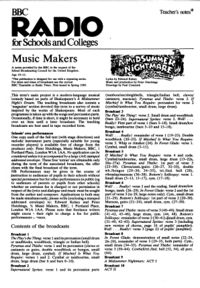 A 16-page booklet containing piano accompaniments to all o fthe songs, and notes on the content of each broadcast. 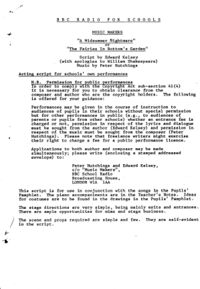 A 20-page version of the story adapted for performance by schools, only available on application to the producer during the term of broadcast. 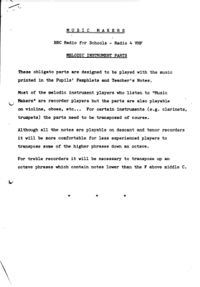 A 5-page set of musical notations giving accompaniments for tuned percussion instruments to each of the songs, also only available on application to the producer during the term of broadcast.

Share
Retrieved from "https://www.broadcastforschools.co.uk/mediawiki/index.php?title=Music_Makers_(radio)/A_Midsummer_Nightmare&oldid=50535"
Categories:
Cookies help this website deliver its services. By using these services, you agree to the use of cookies.
History
Browse propertiesCite this pagePage informationPermanent linkPrintable versionSpecial pagesRelated changesWhat links hereRecent changes