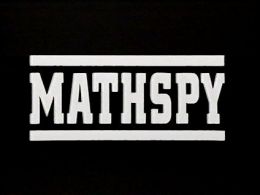 Mathspy is a BBC schools TV series from the 1980s and 1990s, covering Mathematics for secondary school pupils.

A thrilling comedy spy serial in ten episodes. Simple spy Q7, aka Rick, stumbles upon an operation being run by the efficient Q5, aka Sam, to find the Factor, a dastardly enemy who is selling spy secrets. As they investigate Rick and Sam face mathematical challenges involving secret codes, card games, safe breaking, and dead drops.

At the end of each episode the characters are faced with a problem. At the beginning of the following episode they have solved the problem, but viewers do not see exactly how they solved it - that is left for pupils to work out themselves in between episodes, using worksheets which are identical to the ones handled by the characters on TV.

Share
Retrieved from "https://www.broadcastforschools.co.uk/mediawiki/index.php?title=Mathspy&oldid=48064"
Categories:
Cookies help this website deliver its services. By using these services, you agree to the use of cookies.
History
Browse propertiesCite this pagePage informationPermanent linkPrintable versionSpecial pagesRelated changesWhat links hereRecent changes