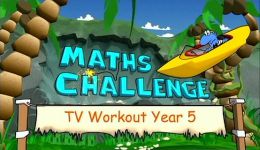 Dr Strangeglove, a megalomaniac with a secret headquarters on a glove-shaped island, hatches a variety of evil schemes to inflict mathematical chaos on the world. Debonair super spy Matt Mattics is hot on his trail, and Dr Strangeglove sportingly offers Mattics the chance to save the world by correctly answering a series of mental maths questions. Mattics has enlisted the help of seven-to-nine year-old special agents with specialist knowledge of topics like rounding and prime numbers to answer these questions for him.

The series brought the quick-fire mental maths quiz format, which had been successful in schools radio since 1999, to television for the first time, presented in thrilling spy adventures. The TV series was originally to be called Maths Challenge: Problem Solving. The already-running Maths Challenge radio series did not feature Matt Mattics but instead had a presenter and a friendly maths computer setting the questions. Another contemporary schools radio series, Maths Adventure, did feature a character called Matt Mattic (no "s") in some of the programmes, but he was an enthusiastic young man travelling around the country in a Maths Mobile, rather than a secret agent.

Maths Challenge TV Workout was an engaging mix of several different elements. The characters were animated in two dimensions, and the environments animated in three dimensions. The special agents who answered questions for Matt were real children who came into the animated world as holograms on Matt's wrist-watch.

In the first series, for year 5 pupils, Matt Mattics was licenced to calculate by the HAMM agency: Help Against Muddled Mathematics. In the second series, for year 6 pupils, Matt was given a licence to chill by an organisation called Inter-Math, and received his missions from the lovely Miss Minny-Pinny, with whom he was hopelessly in love. Inter-Math's top secret headquarters, normally an innocent-looking ice cream van, self-destructed on Matt at the end of every episode. The series was full of references to other spy stories, especially the James Bond films.

Matt asked viewing pupils to answer Dr Strangeglove's fiendish questions alongside the special agents on TV, working out the answers in their heads then writing them down, and adding up their score when Dr Strangelove read out the right answers. Children could earn three possible ranks depending on their score: cadet, secret agent or master spy, and they had to earn a certain score to overcome Dr Strangeglove. The three special agents attempting each mission on TV tended to get different scores to reflect different ability levels, and they did not always get high enough scores to beat Strangeglove. Viewers were also set a mission at the end of each programme - a more difficult question to answer for next time.

Here is a guide to all of Dr Strangeglove's nefarious schemes, and the challenges that Matt and the Special Agents face!

Two activity packs to support using the programmes in the classroom. Each pack contains a 28-page teacher's book including ten weekly problems and 30 photocopiable activity sheets, plus two large colour posters and a set of 40 pictorial question and answer cycle cards (where each card has the answer to a different question on the back, and the whole class works together).

There were also separate activity packs to accompany the Maths Challenge radio series.

Each series was released as a Video Plus pack containing a video of the episodes and the relevant teacher's activity pack. The Video Plus Packs were originally £29.99 plus VAT. By the time the BBC started offering their schools programmes on DVD Plus packs Maths Challenge TV Workout was no longer on sale.

16 of the episodes (all except Percentages and Measures from the Year 6 series) were released on video and DVD in the United States (archived 2013) and Canada (archived 2015).

Watch on YouTube. A promo for a potential children's entertainment series about the adventures of Matt Mattics, with clips from both series of Maths Challenge TV Workout.

Share
Retrieved from "https://www.broadcastforschools.co.uk/mediawiki/index.php?title=Maths_Challenge_TV_Workout&oldid=48043"
Categories:
Cookies help this website deliver its services. By using these services, you agree to the use of cookies.
History
Browse propertiesCite this pagePage informationPermanent linkPrintable versionSpecial pagesRelated changesWhat links hereRecent changes