Maths Challenge is a BBC schools radio series from the 2000s and 2010s, covering Mathematics for primary school pupils.

A mental maths radio quiz for 9-11 year olds, with the questions set by a talking computer called Matrix, which interacts with the programme presenter. The radio programmes are designed to stimulate pupils ('to massage their maths muscle and turn them into mental maths masterminds') with a mix of quick-fire questions, engaging puzzles, music and sound effects. There was also a separate Maths Challenge TV series.

There have been two types of radio programmes. The Mental Maths programmes are wide-ranging quizzes with three rounds. The first round is always "beat the clock", quick-fire maths questions for general practice. In the first few Mental Maths units these questions cover a wide range of topics such as fractions and decimals, money and measurements as well as calculations, but in the 2007 unit they are specifically on the topic of each episode.

Round two involves more elaborate scenarios such as shopping, a visit to the fair, or an athletics competition, leading to multi-stage problem solving - which get longer and more involved towards the end of each term's worth of programmes. And round three is normally "juggling numbers", in which pupils are given several numbers and have to use different mathematical operations to reach a target number.

Early programmes also included a teaching section after the end of the quiz, in which the presenter gives advice on the topic of the episode.

The other type of Maths Challenge programmes are called Mental Booster. These again have a quiz with three rounds, but the questions are all set to provide extra practice on one particular topic.

All of the programmes were designed to encourage mental calculation. Pupils are allowed to write down the numbers that they hear in rounds 2 and 3, but the maths has to be done in their heads and only the final answer written down. The quick-fire questions in the first round only allow 2 seconds of thinking time so that mental calculation is essential.

The programmes were designed to be tape recorded and played back with the teacher in control. There are points in each episode where the programme should be paused, for example to add up the score at the end of a round, and teachers could also pause the recording to give their pupils more time to complete each question if necessary.

Maths Challenge was the first in a range of mental maths programmes introduced on BBC school radio in the late 1990s and early 2000s, soon followed by Numbertime for 5-7 year-olds and Megamaths for 7-9 year-olds. A Maths Challenge TV series was also made, retaining the quiz format but following the adventures of secret agent Matt Mattics instead of Matrix and a presenter.

The BBC used the same names for both the TV and radio series for each age group, but while Numbertime and Megamaths began as TV series, Maths Challenge was first heard on the radio and only appeared on television three years later. This site has a separate page about Maths Challenge TV Workout.

The voice of Matrix was provided by the presenter, with a computer-y filter to their voice.

The first two series were broadcast on Tuesday mornings at 4:15am, but from Autumn 2000 onwards the series has been scheduled on Friday mornings and all subsequent series have been broadcast at various times in the early hours of Fridays.

Since 2005 the programmes have also been available to stream online from the BBC School Radio website for 7 days following the transmission of each episode.

A Maths Challenge podcast was launched in January 2010, allowing each episode of the series to be downloaded as an MP3 file in the week after its broadcast.

A range of activity packs have been published to accompany the series, containing activities targetting "the trickiest areas of the maths curriculum". The packs can be used with or without the radio programmes. There are two packs in each series, one for 9-10 year-olds and the other for 10-11 year-olds.

These initial packs contained a wire-bound activity book with photocopiable worksheets and an audio-cassette with ten 5-minute sections, complementing the teaching sections in the original radio series. The book and cassette were also sold separately.

Activity books with worksheets & teacher's activities were released in 2000. In 2001 these were collected into Activity Packs (with the same ISBN numbers) containing the books and a large poster to support "The Challenge Game". This game involves groups of children answering multiple-choice maths questions and trying to complete a line across the game board (the poster), which is like the board from the TV quiz show Blockbusters'.

A set of activity books and teaching cards. 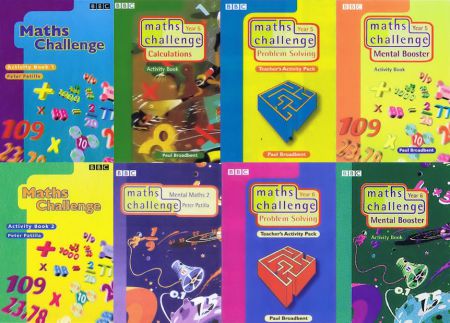 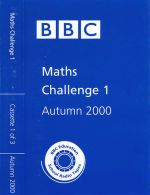 From 1999 to 2005 each term's radio programmes were available to purchase on cassette.

These were later supplanted by CDs, and then MP3 CDs, as well as online distribution.

Share
Retrieved from "https://www.broadcastforschools.co.uk/mediawiki/index.php?title=Maths_Challenge&oldid=48041"
Categories:
Cookies help this website deliver its services. By using these services, you agree to the use of cookies.
History
Browse propertiesCite this pagePage informationPermanent linkPrintable versionSpecial pagesRelated changesWhat links hereRecent changes