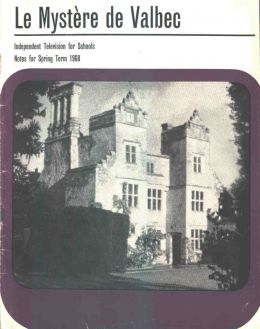 Le Mystère de Valbec (The Valbec Mystery) was a French-language adventure serial in which two children follow a puzzling treasure hunt in a small French town. The "atmosphere of suspense and mystery" provided the spur for viewers to listen closely to the native French speakers in the programme and make sense of the sometimes complex language and vocabulary[1].

This was the last in a long line of French-language schools dramas produced by the ITV broadcaster Rediffusion throughout the 1960s. Previous offerings had come in the form of family serials, capturing everyday life and culture in France through individual episodes of day-to-day drama. The change to an interconnected serial format for Le Mystère de Valbec was made in response to frequent requests from teachers[2], however the episodes were carefully made so that pupils would hopefully not be lost if they missed an episode or came to the series late. This is fortunate as there seems to have been some kind of interruption during the first transmission of the series which led to schedule for one of the two weekly broadcasts being changed.

The main production team had all worked on Rediffusion's previous French-language schools programmes, as had a large number of the cast. André Maranne starred in one of the earliest such series, Notre Ville, which was still being repeated until the summer term 1968. Xavier Renoult and Paulette Preney featured in both Notre Ville and the 1967 series Le Voyage du Jéricho, and the lead boy in Le Voyage du Jéricho was played by Pascal Dufar, who was also lead boy in Le Mystère de Valbec.

Le Mystère de Valbec also has notable similarities to La Chasse au Trésor, a French-language serial shown by the BBC in the same year. Both were about a young boy and girl following a series of old written clues to find a lost treasure, and coming up against rival treasure seekers. They also had several cast members in common including the ubiquitous André Maranne. They were both aimed at pupils with about two years' experience of studying French, although the BBC serial was aimed more directly at children in the final years of primary school, the ITV serial could be used in primary schools but was really for slightly older children. Both serials were also praised for their effective use of drama to encourage language comprehension[3].

Young Daniele and Jacques Duclos are taken by their mother to spend the Easter holidays at a hotel run by their aunt - an atmospheric old Norman manor called Valbec Manor. 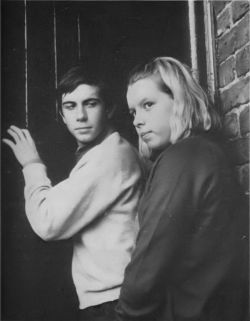 Jacques and Danièle sneak into the stables

The hotel gardener forbids the children from going into the stables, and so of course they go to investigate the building as soon as possible. Inside they discover a strange document in an old chest of drawers.

They show the document to a librarian, who goes on to discuss it with one of the hotel guests, Madame Blanchard. She decides that she must obtain the document at all costs.

Madame Blanchard turns out to be a librarian from the Sorbonne in Paris, and she reveals some of the history of Valbec Manor to the children. During the reign of Marie Antoinette the manor was inhabited by a Count, Louis d'Ornay. D'Ornay was implicated in a scandal when the queen's diamond necklace was stolen and never recovered. Madame Blanchard thinks the document could be linked to the disappearance of the necklace, it could contain a message from d'Ornay revealing where the diamonds are hidden.

The children and their new friend consider the first clue in the document:

Jacques and Mme Blanchard go to investigate the fountain in the park at Valbec Manor, but don't find a key or any insects. Somebody fires a shot towards the fountain, and Jacques spots a reflection which he thinks shows somebody is spying on them through binoculars from the old dovecote. Mme Blanchard thinks he is imagining things, and so does Daniele when the children are reunited later at the manor.
Madame Blanchard shows the document to another guest, Monsieur Gilbert. Gilbert suggests that "the fountain" in the clue could in fact be referring to the poet La Fontaine, and particularly to his fable about insects, The Fly and the Ant, which was Marie Antoinette's favourite.

That night Daniele searches the whole hotel for Jacques but cannot find him. Eventually another guest, the slightly deaf Monsieur Durand, sends her off to bed.
It turns out Jacques had gone to investigate the old dovecote, and as he climbed inside somebody knocked him out - clearly somebody is trying the prevent the children from solving the Valbec mystery.

The next task is to find Count d'Ornay's motto, which the children eventually discover was "ensemble" (together). 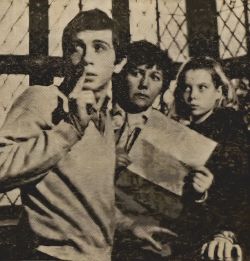 Jacques, Mme Duclos and Danièle consider the clue in the old document

The next part of the document says:

The treasure hunters' research next takes them to the cemetery, where they discover the tomb of the knight Delatre. Delatre could be written as "de l'àtre", French for (basically) "of the chimney" - and there is an imposing chimney at Valbec Manor. This leads them back to the vital missing diary page.

The police finally apprehend the thief who took the document from Mme Blanchard's room, sneaking around the church vestry looking for the treasure. The man had overheard Mme Blanchard talking to the children about a hidden treasure, he shot at them and later knocked out Jacques to scare them off, and stole the document in the hope of finding the treasure for himself - but he couldn't make any sense of the word games and obscure clues. 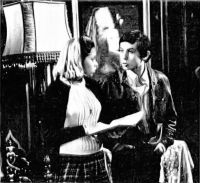 Danièle and Jacques finally get a look at the Count's diary

At the hotel Monsieur Durand asks to speak to Mme Blanchard alone. They talk at length - Durand reveals many interesting things, including things about himself, which help Mme Blanchard to make sense of the mystery. She finally realises where to find the diary, and with the children's help retrieves it. Page 20 describes a dance, beginning "the man positions himself three steps to the left of...". This provides the final clue that they need and putting together everything they have discovered they go to find

a fly and an ant - together - three steps to the left - of the chimney.

What they find there is yet another clue in the form of a word game, but they are not far from the resolution of the mystery.[4]

The drama was told in ten weekly episodes, making up one entire school term. See the Broadcasts section below for a note about the original broadcast dates, which are a little confusing.

* The first episode was shown as an Out of School preview for parents and teachers on 29th December 1967. 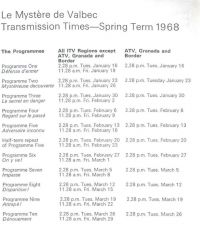 The original 1968 schedule published in the programme notes

The series was originally scheduled in the spring term of 1968, on Tuesday afternoons at 2:28pm and repeated on Friday mornings at 11:28am. On Tuesdays it was shown across the entire country, and on Fridays it was shown by all the ITV companies except for ATV (in the Midlands), Granada (in the north of England) and Border (on the border between Scotland and England), who scheduled their own programmes in the slot.

Early in the term there must have been some sort of interruption to the Tuesday afternoon broadcasts and the original schedule published in the accompanying booklet (see picture left) had to be changed. Episode 3 was listed in the TV Times magazine two weeks running, first on its originally scheduled date 30th January 1968, then again the following week on 6th February 1968, when episode 4 should have been shown. All the subsequent Tuesday episodes were shown one week later than planned, and the whole series finished one week later than all the other schools programmes on ITV that term, on Tuesday 2nd April 1968. This seems to have affected broadcasts across the whole country[5].

The broadcasts on Fridays seem to have been unaffected, and so in fact most of the episodes ended up being shown first on a Friday and then repeated on the following Tuesday, at least in those areas of the country which were showing the series on Fridays. A review of the series published in the Times Educational Supplement in early February 1968 billed it as showing first on Fridays with a repeat on Tuesdays[6].

The first episode had been previewed in an Out of School programme, for teachers and parents to get a first look at programmes to be shown to schools, in December 1967.

Rediffusion Television, the company which made Le Mystère de Valbec, ceased broadcasting in July 1968, shortly after the first broadcast of the series concluded. It was replaced by a new company, Thames Television, which took over the complete Rediffusion schools department and all its staff and programmes[7], which meant that Valbec lived on. It was repeated two further times, in Autumn 1969 and Spring 1972, although not across the whole country[8] - both times billed in the TV Times as "a Thames Television Production."

All 10 episodes of the series are listed in the Fremantle Archive Sales catalogue, in the Thames Television collection - presumably they have been held there ever since Thames repeated the serial in 1972.

The broadcast dates listed in the archive catalogue are the originally scheduled Tuesday dates, presumably these were simply transferred from Associated-Rediffusion's records as Thames was not responsible for the series in spring 1968, when the scheduled transmissions were offset by a week (see Broadcasts section above). 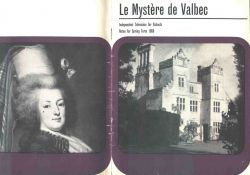 The series was accompanied by a booklet of notes, intended for use by both pupils and teachers. It contained a page or more of description and dialogue for each episode, entirely in French, notes about particular points of French grammar covered in the programmes, and a vocabulary list.

A review in the Times Educational Supplement pointed out that "the printed text is unfortunately not without small mistakes, especially in accents." I believe this is referring to the lack of accents on capitalised words such as the extracts from the Comte d'Ornay's diary: "les insectes aimés de la reine" is rendered as "LES INSECTES AIMES DE LA REINE" without the accent in "aimés", which does change the sense of the sentence. The TV Times listings transcribed this same phrase, without the capital letters and still omitting the accent, which is even worse!

Share
Retrieved from "https://www.broadcastforschools.co.uk/mediawiki/index.php?title=Le_Mystere_de_Valbec&oldid=48205"
Categories:
Cookies help this website deliver its services. By using these services, you agree to the use of cookies.
History
Browse propertiesCite this pagePage informationPermanent linkPrintable versionSpecial pagesRelated changesWhat links hereRecent changes