It's Maths! is a BBC schools TV series from the 1970s and 1980s, covering mathematics for primary school pupils.

David Warwick and Elaine Donnelly are employed to clean up a very messy BBC television studio full of all sorts of old props, and spend all of their time discussing mathematical strategies they can use to solve problems like stacking cans into boxes and counting how many It's Maths! stickers there are on different sized sheets. Often they are completely distracted from their work and argue about how to measure each other's height and experimenting with mirror images of each other.

The TV studio setting didn't just allow for all manner of props to be used - from everyday objects like cans to specialist mathematical measuring equipment - but allowed television trickery to be used routinely and naturally. David and Elaine can 'imagine' animated film and watch each other's thought bubbles, they can appear in unusual places and often talk directly to viewing classes asking for ideas. 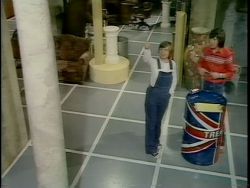 Elaine and David in the studio

Both David and Elaine have some knowledge of mathematics and neither is stupid, although they often have to prompt and remind each other. Generally Elaine is slightly better with numbers and David slightly better with shapes. They fearlessly point out and ask questions which upper primary pupils may have in their minds but don't ask.

A special introductory programme for teachers was shown on Wednesday 14th September 1977 at 12:10pm, shortly before the first transmission of the series itself. It's Maths! was originally intended to be broadcast for 4 school years, until 1981. It was later decided to add a further year of repeats taking the run up to 1982, but "for contractual reasons" that had to be the final transmission. Schools were encouraged to record the 1981-2 transmissions and use the recordings for another three years (in the letter of the law schools were supposed to wipe their video recordings after 3 years in those days).

In autumn 1982 the series was finally replaced by Mathscore.

Share
Retrieved from "https://www.broadcastforschools.co.uk/mediawiki/index.php?title=It%27s_Maths!&oldid=47739"
Categories:
Cookies help this website deliver its services. By using these services, you agree to the use of cookies.
History
Browse propertiesCite this pagePage informationPermanent linkPrintable versionSpecial pagesRelated changesWhat links hereRecent changes