It's Fun to Read 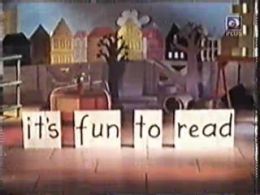 It's Fun to Read is an ITV schools TV series from the 1970s, covering Reading for pre-school children.

It's Fun to Read is a simple, animated series designed as a stimulus for young children just learning to read. The series is set in a "very special playground"[1], where two children called Bill and Penelope come to play. Their adventures revolve around a magic box, built by Bill, which can control all of the playground equipment as well as making things appear and disappear.

The series is graded, meaning that it gets harder as it goes along. The very first episode introduces the characters and asks children to recognise the words "Bill" and "Penelope" from the screen as part of a guessing game. As the weeks go by more words and phrases are introduced, along with phonics towards the end of the autumn term. At the start of the spring term (episode 11) Bill adds a "reading screen" to the front of the magic box so that the characters can try to read sentences from the screen, where one word is underlined at a time, at the same time as the audience. While this approach allowed children to develop over the course of the year, there was no concession for pupils' individual rates of progress during the year, in the days before widespread use of video recording by schools, and children who started watching the programmes after the series began in September would be at a disadvantage[2].

The series is narrated by its author, reading specialist Keith Gardner, who talks directly to the viewing children and asks them questions. As it is intended for young children just starting school and starting to read it is highly repetitive, both in vocabulary and action - the magic box frequently breaks, and the problem is normally solved by somebody, mostly the dog, accidentally nudging it; the narrator often says "oh yes, I thought that might happen."

The animation is extremely simple - the puppet characters generally stand completely still while the narrator describes what they are doing or saying, and sometimes there are simple motions such as hand waving, the swing swinging, or the car driving around. Characters "pop" in and out - i.e. simply appear and disappear - instead of walking around. Nevertheless each 8-minute episode reportedly took two days to film[3].

The series was made and broadcast in colour, but at the beginning of the 1970s most schools were still viewing on black-and-white sets. Teachers found that the use of colour did greatly enhance the programmes, where colour was available, and some teachers viewing in black-and-white complained about a "lack of picture definition"[4].

All publicity for the series was at pains to point out that it was not a reading scheme itself, but supported all of the existing reading schemes in use by schools. Instead it was described as "a shared experience that the teacher can use as a stimulus to explore the concepts underlying reading"[5].

There were just five characters in the series:

The episodes did not have titles as such, but there was a standard, short description for each episode. Master copies of all of the episodes have been kept in the Granada Television archives.

* Programme 11, Bill makes a "reading screen", was first broadcast as an Out of School preview for teachers at 11:08am on Tuesday 29th December 1970.

The theme tune to the series was called Children's Polka by Eric Towren[6]. The opening titles show the model playground being put together bit by bit, with each item suddenly appearing by magic. The playground contains the climbing frame, the roundabout, the tunnel, the swing, and giant letters spelling out "it's fun to read". 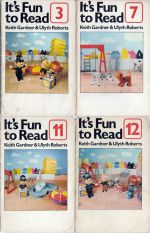 A set of 12 children's reading books were published to accompany the series. Like the TV programmes they were graded, so that the first book contained only very simple words and phrases, and the books become increasingly challenging with longer sentences and a larger vocabulary.

The books did not relate directly to the individual TV episodes - there wasn't one book per episode - but they basically told the same stories as TV episodes 1-10, 16-18 and 26. The books were written by Keith Gardner and Ulyth Roberts, and illustrated with photographs of the puppets.

Each book was 16 pages long, and approximately 18cm x 11.5cm in size. They were not published in time for the first broadcast of the series in 1970, but came out in 1971 to accompany the second broadcasts[7]. For the original printing each book had a different colour background for the front covers, but in a later printing (possibly from 1976[8]) all of the covers had a standard white background. The photographs were still printed in full colour throughout.

Here are brief descriptions of the plot to each book.

Yes that's right, you have just read a description of the plot to 12 children's learn-to-read books. And yes it did include some spoilers!

The teacher's notes booklets contained the full narrator's commentary from every episode and suggestions for follow-up work.

Large pictures designed to be put up on the classroom wall. There was one picture for each episode of the TV series, containing a photograph of the puppets with a key word or phrase underneath. 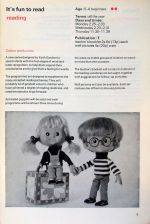 The series was first shown throughout the 1970-1971 (autumn, spring & summer) school year. The first broadcasts were on Mondays at 2:25pm, with repeats on Wednesdays at 2:23pm and Thursdays at 11:30am. The three broadcasts each week meant that children could watch each episode again after they had done some classroom follow-up work.

Border Television, which broadcast a reduced service of schools programmes compared to the other regional ITV companies, did not take the Wednesday or Thursday repeats, but apart from that the series was fully networked across all the ITV regions[10].

New series of schools programmes would normally be previewed for teachers before term began in a series of broadcasts called Out of School. However It's Fun to Read was not previewed in this way, I would speculate because there may not have been a finished episode available by March 1970 when the previews were shown. However it was piloted with a small group of teachers, parents and children before the broadcasts began in September[11].

It's Fun to Read was repeated in 1971-2 (autumn, spring & summer - Mondays 11:38am & Thursdays 11:30am) and 1972-3 (autumn, spring & summer - Tuesdays 11:35am & Wednesdays 10:05am), and this should have been the end of its planned three-year service - a typical life span for a schools programme in the 1960s and 70s. However when the series came to an end ITV had nothing lined up to replace it, to continue providing support to infants beginning to read and their teachers.

ITV received direct requests from teachers and the IBA Schools Committee to provide support in this area, and so in 1976-7 It's Fun to Read was repeated again (autumn, spring & summer), this time on Mondays at 9:47am and Thursdays at 10:33am. This repeat runs served to "plug the gap" until Granada could introduce a new infant reading series, developed in the light of the influential 1975 Bullock Report on the teaching of English (and incidentally Keith Gardner, the writer of It's Fun to Read, was a member of the Bullock committee). The replacement series eventually reached TV screens in autumn 1977. It was called Reading with Lenny, a mix of simple stories about Kevin the Kitten and reading activities with the popular puppet Lenny the Lion and his human friend Terry Hall. However this was not the last time It's Fun to Read was seen on British television.

Granada television launched several satellite TV channels in October 1996. One of these was Granada Plus, showing classic programmes from the Granada archives including Time for a Story (a schools programme) and pre-school programmes such as Alphabet Zoo, Tickle on the Tum and Allsorts.

It's Fun to Read was repeated on Granada Plus beginning on Tuesday 31st December 1996, replacing Sounds Like a Story. Two episodes were shown each Tuesday morning, at 6:30am and 7:15am. The complete run of 26 episodes was broadcast, ending on Tuesday 25th March 1997. The timeslots for It's Fun to Read were then given over to Once Upon a Time but not for long, as pre-school programmes were removed from the Granada Plus schedule at the end of April.

Share
Retrieved from "https://www.broadcastforschools.co.uk/mediawiki/index.php?title=It%27s_Fun_to_Read&oldid=47737"
Categories:
Cookies help this website deliver its services. By using these services, you agree to the use of cookies.
History
Browse propertiesCite this pagePage informationPermanent linkPrintable versionSpecial pagesRelated changesWhat links hereRecent changes