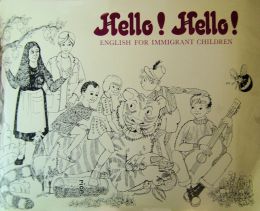 A series of "English for Immigrant Children" consisting of stories and songs with plenty of repetition, designed to help children with English as an additional language. The programmes are short dramas, a mixture of everyday life such as going shopping and folk tales from around the world.

The series was designed to complement stage 1 of the Schools Council Introductory English Course for Immigrant Children, known as "SCOPE". It was devised alongside the advisers for that project, mentioned in the Schools Council literature, and each episode was pitched up to the level a particular unit of work.

The series was broadcast only once, with teachers encouraged to record it so it could be played again and again, and from autumn 1970 it was available on tape for schools to purchase, kept available until much later into the 1970s.

In the same term the BBC re-broadcast a series for teachers, first shown in spring 1969, about how the experiences of immigrant school-children in Britain contrast with their experiences in their home countries. This was titled In Our Midst.

The odd numbered programmes dramatise the activities of a group of children from King Street, who also feature in the published SCOPE course material.

The children form their own pop group, "The King Street Group", with Ranjit, Ali, Joseph and Tony playing a tabla, sitar and pair of guitars respectively, and Carol and Katrina as singers. They have everyday adventures about their families and the songs they make up.

The even numbered programmes tell folk tales from around the world. The intention being to "supply the experience of imagination and fantasy often absent from pure language teaching".[1]

Each episode, of both types, includes a song.

I don't have any details of the cast in the dramas. If you can help please get in touch by email. 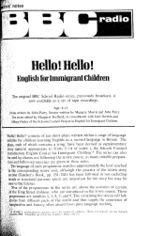 An illustrated pupil's pamphlet (pictured at the top of the page) contained short reading passages, words and phrases and exercises based on the story.

A booklet of teacher's notes (pictured here), written by John Parry and developed in consultation with members of the Schools Council Project, contained extensive suggestions for preparation and follow-up work and how to use each recorded programme.

Both resources were published initially to accompany the broadcasts of the series in spring 1970, and then reprinted for schools to purchase alongside tapes of the series.

Share
Retrieved from "https://www.broadcastforschools.co.uk/mediawiki/index.php?title=Hello!_Hello!&oldid=51250"
Categories:
Cookies help this website deliver its services. By using these services, you agree to the use of cookies.
History
Browse propertiesCite this pagePage informationPermanent linkPrintable versionSpecial pagesRelated changesWhat links hereRecent changes