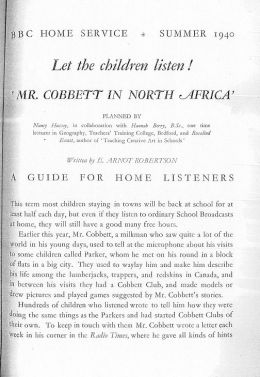 For Home Listening is a BBC schools radio series from the 1940s, covering geography for primary school pupils.

A milkman called Mr Corbett tells stories of his travels to a group of children on his route. In the spring term the stories were about Mr Corbett and the Indians, and in the summer term Mr Corbett in North Africa. The series was designed for children who were not in school, due to the peculiar conditions of the first year of the Second World War, so that they could listen individually or in groups in the families with which they were billeted. Mr Corbett wrote a letter to the Radio Times each week with pictures and diagrams linked to his story, and hundreds of real children all over the country formed "Corbett Clubs" to play games and make models based on the stories.

Red Indians were chosen as the topic of the first term due to "the qualities of toughness and glamour admired by children" and as an example of "disciplined life under conditions of hardship the children can re-create imaginatively and compare with their own urbanized surroundings". The second term was based on Mr Corbett's exploits in the Sahara Desert, flying around by aeroplane and "constantly (meeting) Arabs and wandering tribesmen".

Share
Retrieved from "http://www.broadcastforschools.co.uk/mediawiki/index.php?title=For_Home_Listening&oldid=47315"
Categories:
Cookies help this website deliver its services. By using these services, you agree to the use of cookies.
History
Browse propertiesCite this pagePage informationPermanent linkPrintable versionSpecial pagesRelated changesWhat links hereRecent changes