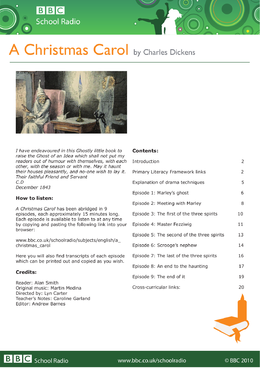 Previous series: Street Child Next series: The Wind in the Willows

A Christmas Carol is a BBC schools radio series from the 2000s and 2010s, covering Literature for primary school pupils.

A 9-part abridgement of the classic Charles Dickens seasonal ghost story, in which miserly Ebeneezer Scrooge is visited on Christmas Eve by the spirits of Christmas Past, Present and Yet to Come.

It was read by Alan Smith, who was also a continuity announcer for school radio broadcasts and would often introduce himself reading it ("read by me, Alan Smith").

All 9 episodes can be heard online at the BBC School Radio website.

Listen on YouTube. Martin Medina has shared his atmospheric title music from the series. 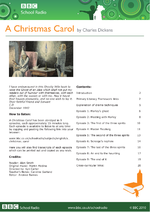 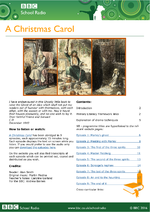 The series was originally broadcast in 2007 accompanied by some basic notes about its relevance to the curriculum.

Teacher's notes written by Caroline Garland were added in 2010, distributed as a PDF file through the BBC School Radio website.

A revised version of the notes with direct links to listen to the episodes and cosmetic changes was published in 2016, again distributed as a PDF file through the BBC School Radio website

Generally it was broadcast in the autumn term leading up to Christmas, but there were also some unseasonal broadcasts in the earlier years. As the series has 9 episodes and the autumn term generally has 10 weeks of broadcasting, the A Christmas Carol timeslot in the 10th week would be taken up with another programme or filler such as clips of songs or extracts from the term's programmes.

Share
Retrieved from "https://www.broadcastforschools.co.uk/mediawiki/index.php?title=A_Christmas_Carol&oldid=49967"
Categories:
Cookies help this website deliver its services. By using these services, you agree to the use of cookies.
History
Browse propertiesCite this pagePage informationPermanent linkPrintable versionSpecial pagesRelated changesWhat links hereRecent changes