The puppet story was accompanied by carefully structured opportunities for reading practice and phonic practice. The Say-Birds each spoke a particular letter of the alphabet, and said the sounds of the letters as they were produced, giving children experience of letters and sounds. Just as in the earlier story Up in the Attic each episode focussed on one particular phonic point, which was woven into the story. Again phrases were occasionally displayed on screen for children to read, and individual words would 'light up' as they were to be read. The episodes were spread out over the autumn and spring terms and transmitted twice a week, but on a fortnightly basis.

The World of the Boffs

A description of all the characters and locations in Sam's daydream world.[1]

As an aid to internet searches, please note that this story is called Sam on Boffs' Island (the island belonging to the Boffs) rather than Sam on Boff's Island (what Boff? Gran-Boff? No, Boff. All Boffs.) or Sam on Boffs Island. 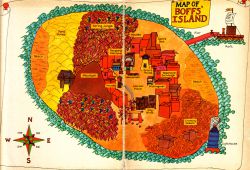 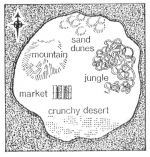 Simple map from the teacher's notes

The centre of the island where the Boffs live is the town with all their houses, made of cardboard boxes. Even Sam has an especially large box where he can sleep when he visits the island.

The centre of the town is the market place, where the shopping machine provides all the goods the Boffs might need. The shopping machine is connected by string to the Say-Birds farm, and the birds' letters travel along this string like a washing line.

Elsewhere on the island there are beaches and sand dunes, a jungle made of string and a mountain. To the south is the Crunchy Desert, a reminder that the island is inspired by Sam's Crackercrunch breakfast cereal. 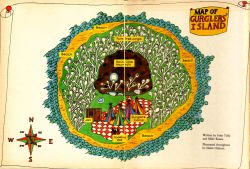 The Gurglers live in a camp on the south edge of their island, in simple bell tents.

Most of the island is taken up by Fork Tree Jungle, made of plastic forks and spoons. Right in the middle is the steep Rock Cake Mountain, where the Boffs become stranded in a story in the Annual.

Almost all of the 20 episodes in the series had the same structure. Sam would be seen going about his daily life in the real world and experiencing something in particular, such as a market, a wedding, or a trip on a ferry. Sam would then begin day-dreaming and he would be transported to Boffs' Island, where he would meet with one or other of the Boffs and discover that their latest adventures are related to what he was doing - they have their own market, a wedding, or a trip on the raft.

The theme tune to the series was based on a folk song called Rissolty-Rossolty[2] and played by folk musicians Sandra Kerr and John Faulkner[3]. The same tune was used for the Gurglers' song Shake Me Up, Wake Me Up in Programme 12[2].

The Boff puppets were made by Peter Firmin, and the stop-motion sequences animated by Oliver Postgate, of the tremendously well-regarded Smallfilms company and makers of such classic children's television series as The Clangers, Ivor the Engine and the sagas of Noggin the Nog. After completing the animation for Sam on Boffs' Island, the next project for Smallfilms was their most celebrated children's programme of all, Bagpuss. The music and some of the character voices for Bagpuss were provided by Sandra Kerr and John Faulkner, sought out and engaged by Smallfilms on the basis of their memorable theme tune to Sam on Boffs' Island[3]. 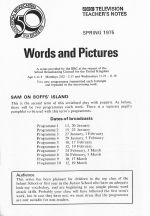 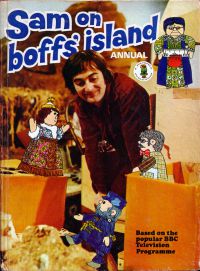 Annual
Such, apparently, was the popularity of Sam on Boffs' Island that there was an Annual released to the general public for 1974. I don't know of any other schools programme that has ever had its own annual (although there have been many normal books released to general, non-schools audiences over the years).

The Annual was published by Polystyle Publications, "based on the popular BBC Television Programme", and released on 24th August 1973[4] It has 60 pages, although the page numbering includes the front and back covers, and is mostly made up of stories about the Boffs told using a series of captioned pictures. The stories are often followed by real-life stories told in the same way - for instance after a story about the Boffs' fire engine came a page about the fire of London. There were also games, pictures to colour, explanations of how things on Boffs' Island like the shopping machine and the newspaper press work, and stories told in traditional prose.

The Annual was written by John Tully and Mike Rosen (sic), and illustrated throughout by Helen Chilcott.

The original stories involving the Boffs were: 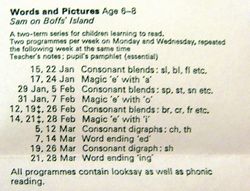 Wallchart listing for broadcasts in spring 1973. Programmes are identified by the phonic points which they covered.

The most significant discovery from the first series of Words and Pictures (Up in the Attic, broadcast in summer 1970) was that teachers needed more time to deal with the TV programmes and do follow-up activities. Sam on Boffs' Island therefore adopted a fortnightly transmission pattern. Two episodes were shown each week. The same two episodes were then repeated, on the same days and at the same times, in the following week.

The teacher's notes explained: "The programmes have been arranged like this to give you and your class more time to consolidate the work begun in the programmes. It also makes it possible for you to see each programme twice, because the repeat broadcast is at the corresponding day and time in the following week." [5]

The programmes were shown in the autumn and spring terms of 1972-3, 1973-4 and 1974-5, always on Mondays at 2:05pm and Wednesdays at 11:23am. After that, in autumn 1975, Words and Pictures changed entirely with a new series of programmes presented by Henry Woolf and Charlie.

All 20 episodes are represented in the BBC archives, according to the free online version of the BBC Programme Catalogue.

The listings for episodes 3-20 describe the holdings as "sequences from (the) series of schools programmes", suggesting that the individual film elements (the sequences with Sam in real life, Sam interacting with the Boffs in the studio and the animated Boffs adventures) might have been kept separately instead of as complete programmes, but everything seems to be accounted for.

The entry for Programme 2 states that the episode is only held in black and white, although all the programmes were originally shown in colour. However, a copy of a colour film recording of Programme 2 has been shared on the internet (this is the source for all the screen grabs on this page) although the colours are quite faded and "everything has a reddish cast to it" in this copy.