A maths series for young children, featuring stories, songs and simple activities similar to its predecessors Let's Go Maths and Maths is Fun. The difference is that rather than the wooden models of those earlier series, Time for Maths uses 3D computer animation - not just for the stories, but for the songs and the presenter's environment as well.

Each episode includes a story set on Honeypot Farm, where Farmer and Mrs Dobbs live alongside George the cat, several scarecrows, and a variety of animals. The computer animation allows the stories to venture into unusual areas and types of experiences - such as the adventures of two young rabbits inside their warren, and a dream sequence in which a giant metallic hen tests Farmer Dobbs' additiona and subtraction skills using huge eggs balanced on the farmhouse roof!

The autumn term episodes introduce the numbers 1 to 10, while the spring term adds concepts of size, shape, time and money, and the summer term stretches to comparing, balancing and fractions. 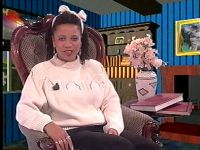 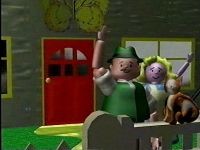 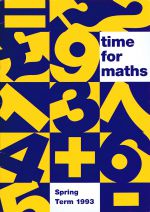 Each of the Honeypot Farm stories was available as a reading book, with pictures and captions for children to read on the right-hand pages and the full text of the story on the left.

Teacher's notes were published for each separate term, and there was a wall frieze, a music and activity pack, computer software and a concept keyboard pack. Apart from the teacher's notes all of the resources were produced and distributed by Mercury Educational Products.