The theme tune for this series was an extract of Jupiter, from The Planets by Holst.

The six songs from Flight, with a short extract from each. The songs from third-party sources were given new arrangements for Time and Tune.

Flying machines circling round and around,
Looping the loop, almost touching the ground.

Where have you been to Peter?
To the stars by the Milky Way.

Drifting slowly across the sky,
All is peaceful for miles around.

Other music played during this unit:

There were 8 episodes of Flight in summer 1975. The 8 episodes were redone in summer 1978, and joined by an additional, ninth episode devoted to listening children's own work, broadcast on a different day from the normal programmes.

There was also a preview programme for teachers at the start of term (which is not included in this site's episode count), playing all of the songs and discussing how to use the programmes.

To the best of my knowledge, none of the episodes have been kept by the BBC archives. 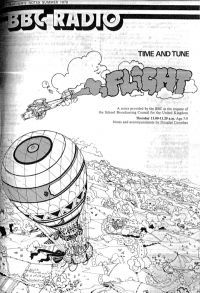 The usual full-colour pupils' pamphlet, and black and white teacher's notes, were published to accompany the series each time it was broadcast.

The pupils' pamphlet included the words and tunes for the songs, and several short poems about flight by John Emlyn Edwards.