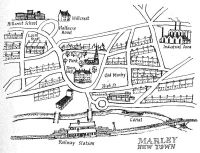 The Brent family moved house in 1960, from East London to Marley New Town, 35 miles to the west, because their old house was going to be pulled down. They now live at 73 Halfacre Road, a three-bedroomed council house in the Hillcrest neighbourhood. They have a small front garden and a back garden which faces on to a small wood. "Marley" was based on the real new town of Hemel Hempstead[2].

Mr Brent is a sheet metal worker at Hamdens factory, and owns a car. Mrs Brent works part time in the school canteen, but at the start of the 1965 series she gets a new job working part time in Apply Monson's Bakery on the High Street. Their children are 15-year-old girl and boy twins who attend Hillcrest Secondary School. The children do not apparently age during the series, but they do change. The actress who played Shirley Brent in 1964 left the series and was replaced in the remaining programmes by another actress - teachers were advised to warn children about the change before the new term's programmes began[3]. The actor playing Colin Brent also changed between the 1965 and 1966 series.

We see several views of Brent families from times past throughout the series - in 1588, 1864 and 1906, as well as the recollections of their Auntie May from 1924. This was a familiar concept for Television Club, as the Wade family of 1910 had also been seen. This earlier view of the past was criticised for being based on recollections rather than fully-fledged reconstruction[4], but the historical Brent families were fully dramatised stories. The children's names were changed for these adventures because Colin and Shirley were too modern[5]. The majority of the historical stories were written or researched by Norman Longmate.

Colin and Shirley in Sweden

A series of three programmes in the summer term of 1965 saw the Brent twins visiting their pen friends in Sweden and finding out all about the Scandinavian country. This unit was made with the assistance of Sveriges Radio Skol TV (Swedish Radio School Television Service) and was filmed in Sweden in 1964 by a Swedish film unit on behalf of Television Club.

When the programmes were repeated in 1968 there were a number of differences between the film shown on TV and the up-to-date situation that had to be taken in to account - in September 1967 Swedish drivers had changed from driving on the left of the road to driving on the right; following devaluation of the pound in November 1967 the exchange rate had changed significantly, and the costs of travel had increased; and the old-fashioned ships on which the children are seen travelling to Sweden had been replaced with a modern car ferry called M.S. Saga[6].

A listing of all the Television Club episodes featuring the Brent family, with title, writer, producer, archive links, original broadcast dates, plot descriptions and guest cast. Episode numbering is restarted for each school year, there were 18 episodes each year for three years, making 54 episodes altogether.

The descriptions, where available, are based either on information from the Radio Times, or descriptions given in the teacher's notes suitably abridged. In some cases I have added extra details about the story from the pupil's pamphlets.

The guest cast lists are entirely based on the Radio Times. The regular cast is listed in the credits section.

The Archive column includes a link to the free online version of the BBC Programme Catalogue for every episode that is available there. Only 7 out of the 54 (55 if you count the Magazine Special) episodes listed here appear in the catalogue, it seems that recordings of the rest have not been kept by the BBC.

Listings for Television Club in summer 1968, including the Magazine Special.

When the 1965 series of Television Club was repeated in 1968, the episodes were shown in a slightly different order and one of them, It's None of Your Business was not repeated at all. Instead, a new Magazine Special episode was shown at the beginning of the summer term, on 30 April 1968 (programmes were first shown on Tuesdays but the wallchart listing pictured to the left is for the Wednesday repeats, which is why the date given is 1 May 1968).

This episode did not feature the Brent family in the usual way, instead it showed film of work being done in schools based on the spring term programmes, and in the studio models, drawings and other work by children inspired on the programmes. There were also short extracts from some of the spring term episodes[8].

The Magazine Special was introduced by the usual Club host, James Lloyd, but had a new producer, Laurence Wade. 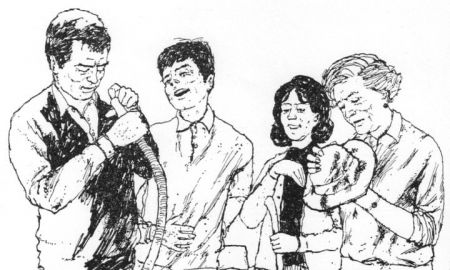 For each term that the series was shown a set of teacher's notes were provided, giving descriptions of each episode, extensive background information on the topics covered, and suggestions for follow-up work and discussion.

There were also colourfully illustrated pupil's pamphlets, and unlike the pamphlets for the Wade family which presented an almost magazine-like collection of stories, facts and craft suggestions, the Brent family pamphlets were simply story books, recounting the family's adventures in each episode.

A review of the material praised the teacher's notes as meeting "the usual high standard we have come to expect from the B.B.C.," and the pupil's pamphlet as "well prepared and useful."[9]