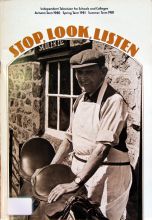 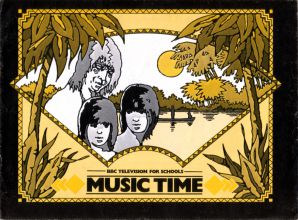 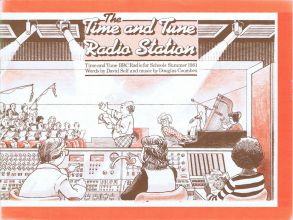 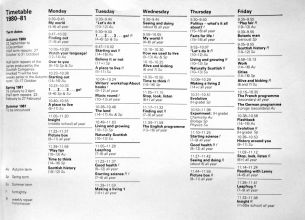 Schools radio programmes in England, Scotland and Northern Ireland ran from Tuesday 5th May (as Monday 4th was the May Day holiday) to Monday 6th July 1981. There were no programmes in the week beginning 25th May due to half term, so a total of 8 weeks of broadcasts.

The programmes on Radio Cymru in Wales ran one week later than the rest of the country. Radio Cymru carried all of the primary school programmes from the main school radio service from England, but on their own totally different schedule in the afternoons. Many areas in the south and east of Wales could receive the Radio 4 VHF signal in addition to Radio Cymru, so they had a choice of which schedule to follow. In fact these schools could choose between two separate episodes of Let's Join In on Friday afternoons, being transmitted simultaneously by the two stations. Radio Cymru also broadcast Welsh-language programmes for learners of the language in the afternoons, and Welsh-language programmes for Welsh speakers in the mornings. They did not carry any secondary schools programmes at all, and so a special pre-recorded cassette service was offered by the School Broadcasting Council for Wales whereby schools could order up to 60 programmes on cassette free of charge during the year, and more at a rate of 80p each. This was not yet a general tape-recorded distribution system for radio programmes, which the BBC would set up later in the 1980s, but specifically a substitute for over-the-air reception of programmes, as the cassette service was only available to schools who could not receive Radio 4[1].

The second European Broadcasting Union Children's Storywriting Competition was launched this term. An unfinished story called The Secret of the Dark Forest by Lea Pennanen was broadcast several times on BBC radio, read by Martin Jarvis, and children were invited to write an ending for the story in not more than 600 words. The ten-minute programme was first broadcast within the series Playground on Radio 1 on Saturday 30th May 1981, and was then repeated during schools programmes on Radio 4 VHF - on Tuesdays 2nd, 9th & 16th June at 11:20am and on Monday 6th July at 11:40am.

Budgets for school broadcasting had been cut drastically for the year 1980-81 - by 10% for school radio in England, and 100% for school radio in Scotland! - and would be cut again in subsequent years as the battle between the entertainment-focussed BBC and its education-focussed Educational Broadcasting department, which had been fought with ever-increasing force over the preceding decade, finally turned in favour of the central BBC. The Head of School Television, Geoffrey Hall, had warned in September 1980 that gaps would begin to appear in his schedules in future years, but in school radio those gaps were already painfully visible by this summer term (see the Radio 4 grid above)[2]. In addition, several series did not last for the whole term - there were only 4 weeks of Drama Workshop programmes, and Religious Education and Living Through History were also replaced by "music interludes" before the full 8 weeks were up.

The Capricorn Club radio series, accompanying Capricorn Game on TV, was new this term. On Radio Cymru the series Cam Ymlaen had been introduced in autumn 1980 and continued this term, the second stage of programmes for young learners of Welsh continuing from Dere Di. Of course most of the individual episodes of the series broadcast this term were new.

BBC schools TV programmes ran from Tuesday 5th May to Friday 3rd July 1981. Most programmes took a week off in the week beginning 25th May due to half term, including You and Me which usually continued broadcasting throughout half term for the benefit of young children at home, but strangely not including Télé-France which went out as normal that week. On Monday 4th May You and Me was broadcast, but at the earlier time of 10:45am. This was just before the regular broadcast of Play School on BBC2 - normally on Mondays this term You and Me was shown at 11:25am, immediately following Play School.

Most of the programmes had very short runs this term and finished after a few weeks - for instance Encounter: Spain and Descubra: España, which would normally be shown fortnightly to stretch them over a complete autumn or spring term, could be shown on a weekly basis and when they ran out of episodes they simply left the schedule. From 22nd June onwards all of the afternoon programmes, and many late morning programmes, were disrupted by coverage of Test Cricket and the Wimbledon Tennis Championships. Many programmes had finished by then, but the afternoon broadcasts of Words and Pictures, You and Me, Watch and Music Time were moved to BBC2 for the final weeks of term. The Thursday broadcast of Television Club was moved to 9:25am, as by the time of its usual broadcast at 2:40pm the BBC needed to be broadcasting Wimbledon coverage on both BBC1 and BBC2 simultaneously, so there was no space left! On 4th and 18th June the Wales-produced series Search was broadcast as usual on BBC1 Wales, but everywhere else in the country it was replaced with Cricket coverage. There was also horse racing coverage on the BBC during May, but this was kept to BBC2 out of the way of the schools programmes.

Capricorn Game was new this term, a series for children with learning difficulties featuring an adventure serial and puzzles, linked to Capricorn Club on the radio. Mind Stretchers, a series of five-minute programmes encouraging thinking skills in a variety of school subjects, was also new this term, as was the geography series Brazil and the technology series Today and Tomorrow. Finally Encounter: Spain and its Spanish-language equivalent Descubra: España were both new this term, continuing a tradition of such programmes in the summer term which began with Encounter: Germany in summer 1977, Encounter: Italy in summer 1978, and Encounter: France in summer 1979.

There were also new episodes of Watch, Music Time, Merry Go Round, Scene, Search and Hyn o Fyd amongst others.

In addition to the programmes shown above, Am Gymru, About Wales, Cymru a'r Môr and Mwy Neu Lai were all apparently shown on HTV in Wales. I am not certain whether there were any other programmes shown elsewhere[4]. The series Naturally Scottish and Scottish History shown by Grampian are likely to have been shown at the same times by Scottish Television and Border Television.

Programmes ran from Tuesday 5th May to Monday 6th July 1981, with no programmes in the week beginning 25th May.

The German Programme only ran until 12th June, when it was replaced by a series of nature documentaries - I'm not sure that these were specifically schools programmes.

The second series of the infant maths series Mwy Neu Lai was apparently[4] new this term, the first series had been shown in autumn 1980.