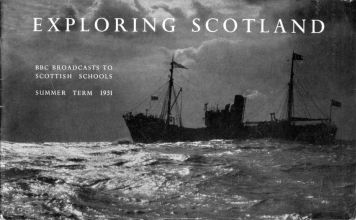 Broadcasts in England and Northern Ireland.

Most programmes ran from Monday 16th April to Friday 6th July 1951. The daily News Commentary and the Scottish version of How Things Began (there was a separate production of the series for Scotland this term, which ran in the same timeslot as the general How Things Began programme transmitted elsewhere; it began a week before most other programmes began and finished two weeks before most other programmes finished, to be replaced in Scotland by musical performances) began on Monday 9th April, and the Service for Schools began on Friday 13th April. The series News Commentary, Cwrs y Byd and Current Affairs all continued into the week ending Friday 13th July.

In the week beginning Monday 11th May 1951, the Whit week school holidays, there were very few schools broadcasts in England, Northern Ireland and Wales, just the series for older pupils French for Sixth Forms, Intermediate German and Talks for Sixth Forms continued. However, new episodes of almost every schools series were produced that week, and broadcast only in Scotland where the holiday week was not observed. The episodes of History I, Adventures in Music and Geography were also broadcast on the Northern Ireland Home Service that week, and the Geography episode on Britain's Trade Links with the Americas was repeated for the whole country on 27th June. This meant that there were 12 episodes of most programmes this term, but only 11 of them broadcast in England and Wales.

Every day at 11:00am during the week beginning Monday 9th July 1951 a Commonwealth Exchange programme was broadcast. These were programmes produced by the national broadcasters of Australia, New Zealand, Ceylon, South Africa and Canada to inform schoolchildren of the other nations about Something We're Proud Of. The BBC also produced a special programme about the Merchant Navy which was broadcast overseas but not in Britain[1]. Subjects of the other programmes ranged from The Flying Doctor and the Canadian Pacific Railway to The Capture and Training of Wild Elephants (this last from Ceylon).

The Festival of Britain was opened during this term, and several programmes offered material related to the Festival. Living in the Country included a programme on the subject, and For the Fourteens offered a series of talks (an article in the Radio Times accompanying the 1st May broadcast[2] explained that "to give schoolchildren an impression of King's Lynn on the eve of the Festival, Wynford Vaughan Thomas is going there with a recording car."). But the greatest contribution came from Looking at Things, which devoted most of the term's programmes to talks on architecture and town planning. This was not special in itself, as Looking at Things had included a similar unit the previous year using the same title, The Town You Live In, but this term's programmes were firmly inspired by the Festival, including a tour around the Lansbury Estate (or "Neighbourhood Unit") built as part of the Festival, and an episode on Designing an Exhibition.

The Festival of Britain also interfered with the schools broadcast schedules a little. On Thursday 3rd May 1951 the schools programmes between 11:00am and 12:00noon were replaced by coverage of the opening ceremony, which was broadcast simultaneously on the BBC Home Service and Light Programme. On Friday 4th May the repeat of Music and Movement II was replaced by coverage of the King opening the South Bank Exhibition, and on Thursday 24th May Rhythm and Melody was replaced by a relay of the Empire Day Service from the Festival of Britain Church, which was intended for use by schools.

There were no newly introduced series this term, but this was the final term of broadcasts for English for Under-Nines and Junior English, which would be renamed Stories and Rhymes and Adventures in English respectively in the autumn term.