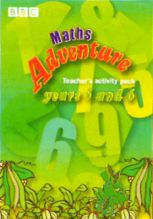 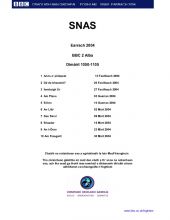 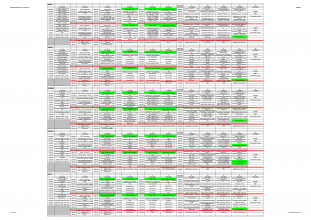 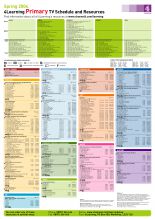 Programmes on Radio 4 and Radio Ulster began in the week commencing Monday 12th January and ran until Friday 26th March 2004. There were no programmes in the week beginning 16th February due to half term.

The fourth series of Hurley Burley on Radio Ulster was new this term[1]. On Radio 4 Maths Adventure for Year 5 and Year 6 was new this term. The series had begun in autumn 2003 with a series of programmes for Year 3 and Year 4 hosted by Matt Mattics from the TV series Maths Challenge, but these spring term programmes had a presenter called Kate and a time-travelling maths machine called Tempo.

There were two new units of Time to Move this term, Rhythms of Spring (originally billed as Beginnings) and How Loon Outsmarted Winter (originally Myths & Legends). All of this term's Stop, Think, Wonder programmes were new, and so was Just Prose.

Primary schools programmes shown during the daytime on BBC2 ran from Monday 12th January to Friday 2nd April 2004. There were no programmes in the weeks beginning 16th & 23rd February, which leaves 10 weeks of schools broadcasts altogether.

Programmes on the CBBC Channel ran from Monday 5th January to Friday 2nd April 2004, with the same two weeks off as BBC2 giving 11 weeks in total. The week beginning 5th January (which is not included in the grid above) consisted of back-to-back repeats of several complete Look and Read stories, plus the Megamaths: Tables series, occupying the entire morning. The Look and Read broadcasts are documented on this site's pages about Look and Read. The final week of term consisted of exam revision programmes as shown in the grid.

New primary school programmes on BBC TV this term included the very last Look and Read story, Shadow Play, and a third series of Barnaby Bear programmes in Watch. Science Clips and The Way Things Work both began in the autumn and continued with new episodes this term. In fact from 20th January onwards new episodes of The Way Things Work were shown first on the CBBC Channel. I think this was the first time any schools programme was premiered on the CBBC Channel before being broadcast on BBC2. The Primary Chat Guide, a 10-minute programme on internet safety, was also premiered on the CBBC Channel on Monday 22nd March, and repeated at the same time throughout that week.

The new TV drama series Snas was new this term on BBC2 Scotland, there was also a radio companion called Snas Earranta. The Scottish Gaelic children's magazine programme De a-nis? included a feature on Snas in its edition of 15th January 2004. There were two new episodes of Around Scotland (by far the longest-running schools programme in Britain) at the beginning of term called Election Day, based on the 2003 Scottish Parliamentary Elections. These episodes were shown at 11:50 on Mondays, the slot normally taken by See You, See Me, and as such were the only episodes of Around Scotland to be seen in Northern Ireland this term. In Wales there were new TV and radio episodes of Bobinogs.

The Learning Zone was broadcast 7 days a week in the early hours of the morning on BBC2. For the very first time this term the programmes were arranged into "theme nights" and standardised to start mostly at 2:00am, apparently "so similar programmes are brought together on a single night, making it easier for you to record them."[2] Up until Autumn 2003 the schools programmes were be broadcast for a few hours each night and followed by language or other types of programmes, and the Learning Zone began at different times between 0:30am and 3:00am each night (as in autumn 1998 for example).

Open University and General Interest programmes were shown on Saturday and Sunday mornings from 2:00am to 6:00am. Spring term programmes began on Saturday 10th January, and the standard school term programmes finished on Friday 2nd April 2004. There was no half term break. Open University and WorkSkills programmes continued uninterrupted throughout the Easter holidays, including over Easter weekend itself. GCSE Bitesize Revision programmes (aimed at school pupils, to record themselves outside school) were shown on Tuesday to Friday mornings at 2:00am to 6:00am throughout the Easter holidays.

The Languages & Travel strand on Tuesday mornings included programmes on Italian, French, Chinese, Spanish, Portuguese, German, and Japanese this term. The majority of Schools programmes on the Learning Zone this term were exam revision programmes shown in 2-hour blocks.

On Wednesday mornings there were Revisewise at Home, Revisewise Challenge at Home, and Revisewise at School programmes for Key Stage 2 National Tests in English, Maths and Science. (There were also several Revisewise Shorts 10-minute programmes shown in the daytime schedules on Tuesdays in the last 2 weeks of term).

On Thursdays there were standard secondary schools programmes, including English File, History File, Scene, and Turning Points. There were also a number of Revisewise Challenge at School programmes.

The interactive teen drama L8R began this term, the first four 10-minute episodes were shown when they could be fitted in on Thursday mornings at 5:50am throughout February and March 2004. There was a new one-off half-hour play on the morning of 15th January called I'm a Juvenile Delinquent, Jail Me!, about a reality TV show manipulating a gang of kids into anti-social behaviour.

The Channel 4 programmes which were pre-empted by S4C's Welsh schools programmes at 11:30am on Tuesdays, Wednesdays and Thursdays were still shown in Wales. They were shown in the 9:00-9:30am slot the following day (Wednesdays, Thursdays & Fridays). This meant that often on Fridays S4C would show one episode of a series at 9:00-9:30am, and then the next episode at 11:30am-12:00noon. This did not always work smoothly - if Channel 4 did not schedule a convenient half-hour programme at 11:30am, S4C had to rearrange the schedules to drop half an hour from another time. So even though they were showing the same programmes, Channel 4 & S4C often showed them in a different order. In the week of 15th March Channel 4 & S4C had horse racing coverage at 8:30-9:30am, and S4C did not add the 9:00 schools programmes in that week. I believe S4C showed The English Programme in place of Modern Studies in week 4, though this may simply be a discrepancy in the listings.

The Royal Institution Christmas Lectures 2003 shown in the first week of term were - obviously - new this term, having been first shown on Channel 4 over the Christmas holidays. The dramatisation of Jacqueline Wilson's The Illustrated Mum was shown in 4 parts for the first time this term, although it had previously been broadcast as a feature-length single programme for schools and for general audiences in December 2003.

The final series of The Number Crew was first shown this term, with 5 programmes on Shape and Space for 5-6 year olds and another 5 for 6-7 year olds. There were also new episodes of Arrows of Desire and Faith in Action, two new units of GCSEase: Hot Wired and Health and Social Care, and four new units of Life Stuff: Working Week, From the Top, Decisions and More Than Love.