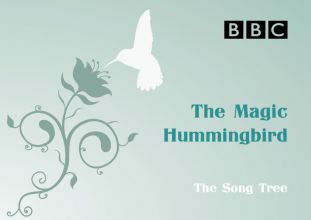 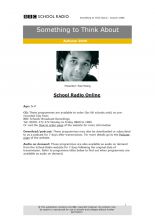 Something to Think About
(Radio 4 Digital, Tuesdays 3:15am) 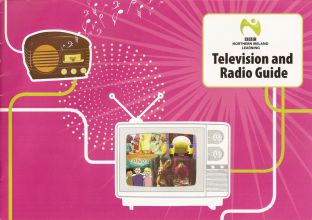 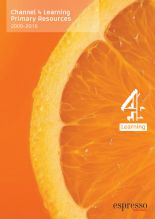 Channel 4 website listings for the final week of broadcasts

Programmes ran from Tuesday 22nd September to Friday 4th December 2009, with no broadcasts in the week beginning 26th October - a total of 10 weeks.

The reading of A Christmas Carol broadcast on Friday mornings is only 9 episodes long, so in the final week of term there was a special programme previewing the spring term. This was presented by the continuity announcer Alan Smith, who was also the reader of A Christmas Carol, and included several songs from the Music Workshop: Heroes of Troy programmes (which seem to have made up the bulk of the school radio preview programmes throughout 2009).

Stimulus Sounds was an entirely new series this term, an early learning series designed for reception classes which played a series of sound effects linked to a different theme each week, played first with a presenter talking about them, and then again on their own as a continuous sequence of sounds. Stimulus Sounds used the same Listen All Around theme song as the other early learning series, Listen and Play. The history clips series Britain Since the 1930s was also new this term.

There were no broadcasts for schools on any of the other BBC radio stations this term.

Broadcasts in England and Scotland.

General Class Clips programmes had been broadcast in the Learning Zone since 2005, aimed at secondary schools these programmes are simply compilations of themed extracts from other programmes out of the BBC archives. The Class Clips: Darwin's Album series had also been shown during the daytime primary schools programmes in 2009. But this term saw the first series of Primary Class Clips, 4 programmes on Art and Design. These were for a younger age group and mostly used clips from children's programmes such as Smart.

The second series of Tellytales on BBC2 Wales was new this term, broadcast for schools in advance of a national run on the Cbeebies channel from Tuesday 13th October.

There were three new programmes on food towards the end of term, produced in Scotland, which as far as I'm concerned were part of the on-going series (and longest running schools TV programme in the UK) Around Scotland, even if that title is not used officially any more.

There was some sort of problem with the rights to show Magic Grandad this term. During the summer holidays the BBC removed a lot of Magic Grandad material from the Learning Zone Broadband Class Clips streaming video site (although some of the later video clips were quickly restored, many remained unavailable throughout the autumn term) and a scheduled broadcast of the most recent series on Thursday mornings this term was cancelled and replaced with Barnaby Bear.

The BBC's Scottish Gaelic-language television channel BBC Alba, broadcast nationally on satellite and cable, introduced a schedule of schools programmes for the first time this term. The series were A' Bhùth and Snas, originally shown on BBC2 Scotland in autumn 2005 and spring 2004 respectively. They were shown alongside general children's and educational programmes, but notes on the BBC website showed they were clearly aimed at schools[1].

The programmes were broadcast from Friday 18th September to Monday 14th December 2009, but skipping three weeks in the middle of term from Friday 9th to Monday 26th October respectively, when they were replaced by extra episodes of the children's cartoon Màrtainn MacDìomhair (Martin Mystery). So there were a total of 10 weeks of broadcasts.

Overnight broadcasts on the Learning Zone only ran for six weeks in the entire term, from the week beginning 5th October to the week ending 27th November 2009. There were no languages & travel or any other type of educational programmes during the gaps in overnight schools broadcasts, the BBC chose to just show Pages from Ceefax instead.

This term's compilation of Scottish programmes on the Learning Zone, shown on Friday 16th October at the end of the week of history programmes, was shown at the unusual time of 3:30-5:30am, within the watershed period when programmes unsuitable for young children can be broadcast (see autumn 2008). The reason for this is likely to be that the final two programmes in the compilation, on poetry by Carol Ann Duffy and Liz Lochhead, contain mature themes, fairly disturbing images and some quite strong language which would be unsuitable for broadcast immediately before the Cbeebies programmes for very young children at 6:00am.

Programmes were broadcast from Monday 7th September to Friday 13th November 2009, with no broadcasts in the week beginning 26th October - a total of 9 weeks of broadcasts.

There was one new programme this term - an hour long episode of Year Dot shown on Monday 7th September to wrap-up the Year Dot project which had begun in autumn 2008. This was in fact the last new complete schools programme ever to be shown on Channel 4 - and autumn 2009 was the last term with regularly scheduled schools programmes on Channel 4 - as the company completely shifted their commitment to schools material into online resources instead of broadcast programmes.

Between programmes there was the premiere of several short Essa Winning Films on Monday 14th September, and several new First Light short films shown for the first time on Friday 23rd October.

Other fillers between daytime programmes this term were Before and After, Burning Questions, Freshly Squeezed Shorts, Dream Commissions (Designers Under Pressure Shorts), I've Got This Friend, National Gallery, Self Portrait UK, Tate Modern, The Television Set (Get Me the Producer Shorts), and Three Minute Wonder.