The Historical Geography of Wales
(Welsh Regional Programme, Wednesdays 11:05am) 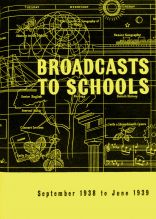 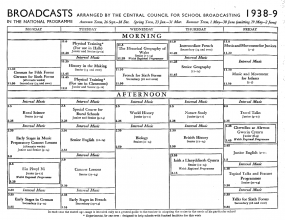 Timetable for England and Wales 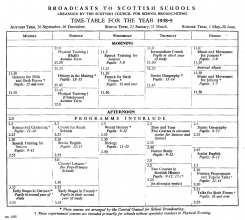 These programmes fit into the gaps in the general schools schedule shown above. All of the national broadcasts were available in Wales on the National Programme.

The broadcasting term ran for 12 weeks, from Monday 26th September to Friday 16th December 1938. Schools programmes were carried on the National Programme on long wave from Droitwich, and relayed on some of the English regional medium wave stations.

Scotland provided several of the series for national broadcast (Physical Training and Intermediate French) and there were some special Scottish episodes in series such as Junior English while different episodes were broadcast in England and Wales. There were also several series heard only in Scotland. Schools in Wales received 3 series in the Welsh language and 1 in English in addition to the national broadcasts. There were no schools broadcasts in Northern Ireland.

On Tuesday 27th September 1938 the final three schools programmes of the day were not broadcast in Scotland, as they were replaced by a relay of the launch of a new Cunarder called Queen Elizabeth in Clydebank, with speeches by His Majesty the King and Her Majesty the Queen.

The Physical Training series had been intended as experimental for autumn term 1938 only, "designed to help schools with limited facilities for this work", but the experiment was evidently extended as the series continued.