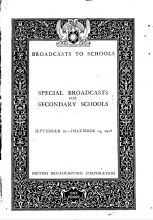 The Kent Report on educational broadcasting, whose influence was seen for the first time in autumn 1928. 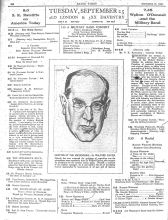 Radio Times listing for 25th September, with a portrait of Walford Davies

Programmes broadcast on 2LO & 5XX only, not taken by the other regional stations.

Programmes broadcast on 5NO Newcastle only.

Programmes on 5WA Cardiff and 5SX Swansea. All Welsh programmes originated on 5WA and were relayed by 5SX.

Programmes on 2BD Aberdeen, 2DE Dundee, 2EH Edinburgh and 5SC Glasgow. All of the Scottish stations provided at least one programme for this schedule, which was common throughout Scotland.

The main broadcasting term ran for just over 12 weeks, from Friday 21st September to Friday 14th December 1928 in England (and therefore Wales and Northern Ireland too). There were no programmes on Friday 26th October. Programmes in Scotland started on Monday 24th September and did not take the Friday in October off. Programmes in Newcastle ran one week later than everywhere else, beginning on Monday 1st October and running until Thursday 20th December 1928.

After the end of term there were two more special programmes from Daventry - a 45-minute School Breaking-Up Party on Monday 17th December 1928 from 14:30, and a 1-hour Concert of School Tunes and Songs on Tuesday 18th December 1928 from 15:00, both given by Sir Walford Davies. On 19th December schools programmes were replaced by a special seasonal programme: the 35th Annual Banquet to Little Londoners and Distribution of Hampers to Crippled Children relayed from the Guildhall.

Also for the first time this term, according to a report in The Times, the London County Council permitted its schools to listen to the radio programmes on any day of the week. Previously they had been restricted to one hour on Friday afternoons.

The new series Looking at Pictures on Friday afternoons, given by Miss A. Berry of the Arts League Service, was the first schools broadcast series on art[2]. Many of the other programmes were variations or improvements on earlier programmes. In particular, Rhoda Power began the new series What the Onlooker Saw, a development of her earlier series Boys and Girls of the Middle Ages which had been roundly praised in the Kent Report.

Sir Walford Davies delivered all three of the music appreciation courses on Tuesday afternoons, which ran consecutively from 2:30pm to 3:30pm. He then returned to the air at 9:15pm to deliver his celebrated series for adults, Music and the Ordinary Listener.

Ten pamphlets were published to accompany this term's broadcasts[3]. In addition to the general syllabus document called Special Broadcasts for Secondary Schools, which is pictured at the top of this page, there were pamphlets to accompany the French broadcasts in Readings in Foreign Languages, Looking at Pictures, Foundations of Poetry, What the Onlooker Saw, Nature Study for Town and Country Schools, all of Walford Davies' music programmes compiled into the Scolars' Manual No. 1, a book of teacher's notes on Speech and Language, and illustrated pamphlets for The Why and Wherefore of Farming and Round the World.