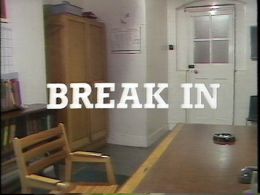 Previous unit: The Hospital Next unit: A Sober and Industrious Life

Previous drama: Because I Say So Next drama: Alone on the Moors

Break In is an episode of the BBC schools TV series Scene from the 1970s and 1990s, covering citizenship for secondary school pupils.

Three boys break into their school during the holidays to retrieve a confiscated football. They find the school is a different, more exciting place when it is empty. They also look through their personal files.

From the teacher's notes

"Willy Russell feels that the play is about boredom and frustration - the energy of those young people turned to destructive use. It also describes the author's feelings about some of the failings in the education offered them - some of the pupils never get a chance to use those musical instruments provided and merely glimpse the artroom. It is also about property - where can kids in big cities go for the holidays - and who are schools for anyway?" - Scene teacher's notes autumn 1975 p.13.

Also broadcast for a general audience, in the evening on BBC2 as part of a run of Scene dramas in August 1977.

Share
Retrieved from "http://www.broadcastforschools.co.uk/mediawiki/index.php?title=Scene/Break_In&oldid=46761"
Categories:
Cookies help this website deliver its services. By using these services, you agree to the use of cookies.
History
Browse propertiesCite this pagePage informationPermanent linkPrintable versionSpecial pagesRelated changesWhat links hereRecent changes