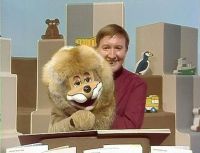 A series to encourage children who are learning to read. Ventriloquist Terry Hall reads a story to his puppet Lenny the Lion, who is just learning to read. Lenny follows along and comments on the story, and then at the end he reads along with a simplified version of the story with the words shown on screen. After the story Terry and Lenny play a reading-related game, such as thinking of rhyming words or Lenny finishing off a story that Terry starts.

The story books all concern the adventures of Kevin the kitten, his mum and dad, and his friends including Belinda the bear, Duncan the dog, Gary the goat, Leslie the lamb and Rachel the rabbit. The 28 stories are not graded (i.e. they don't increase in difficulty) but remain at roughly the same level of reading to encourage children's enjoyment of reading.

The Kevin the kitten stories were all written by Terry Hall himself, who had previously published a successful series of children's reading books called Laugh and Learn[1], and his puppet Lenny the Lion was chosen for his popularity among young children. The series proved popular both in infant schools and among parents with children at home[2].

The children's reading books were shown on screen, but Terry read each story from a large book propped-up in front of him. He did not actually handle the books, because Lenny occupied both of his hands, but while he was reading the illustrations were shown full-screen with an effect of pages being turned.

* Kevin and the Door was previewed in a Next Year at School programme on Tuesday 5th December 1978.

A selection of pupils' book covers

All of the Kevin the kitten stories were published as children's reading books, with the full text of the story on one side of the page, and illustrations with simple captions on the other side.

They originally cost £1.70 for a set of ten reading books covering one whole school term. 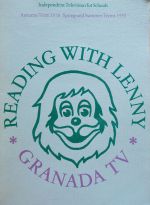 A booklet of notes for the teacher, covering the background to the series, a brief overview of each episode with all of the picture captions and a basic description of the game that Terry & Lenny play, and extensive suggestions for follow-up work in the classroom.

There was also a set of tear-off gummed stamps with Lenny's face on them, for giving out to the class.

The notes were written by the series advisor Betty Root, tutor in charge of the Centre for the Teaching of Reading at the University of Reading School of Education. The notes booklet covered the whole year of programmes, and originally cost 40p.