Over the Moon with Mr Boom 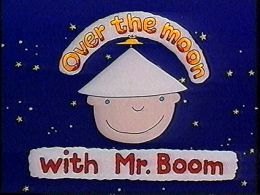 6 images from Over the Moon with Mr Boom

Over the Moon with Mr Boom is a BBC schools TV series from the 1990s, covering Early Learning for primary school pupils.

A charming series devised for nursery and infant classes in Scotland, which became popular throughout the UK.

Mr Boom is a one-man-band, singer and songwriter who lives in a dome on the moon and communicates with viewing children who come 'over the moon' to visit him. Each week the space mobile library arrives and a storyteller visits Mr Boom to read him a story. He also looks through his telescope to see activity back on Earth in a filmed documentary sequence. Finally he sings a song and bids goodbye to the children as they "return to their Earth location".

A cartoon strip illustrating the concept of Over the Moon for teachers.

After a year on the air in Scotland only, the series was given a networked slot and shown throughout the UK on BBC2.

Mr Boom, created and performed by children's entertainer Andy Munro, had been enthralling children throughout Scotland at schools and live events for years before the series began, and continued to do so after the series ended. He can be booked through his website mrboom.co.uk, which also contains photos and games. 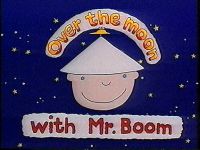 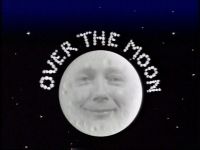 Here is a list of all 67 episodes of Over the Moon.

There were some different episodes with the exact same titles - for example there was an episode called New Baby in autumn 1990, and then another different episode called New Baby in autumn 1994. To distinguish between them, the year of first broadcast is added to the duplicates in the list above ("New Baby (1990)" and "New Baby (1994)"). This does not mean that there is any link between the episodes, it just means that they had the same title.

In autumn 1991 & spring 1992 a series of 20 new episodes were broadcast throughout the UK, on Tuesdays at 10:00am, repeated on Thursdays at 10:15am. In the summer term the timeslot was occupied by national broadcasts of the Gaelic-language series Sealladh is Seanchas.

In autumn 1992 & spring 1993 the programme was again shown nationally on Tuesdays at 10:00am & Thursdays at 10:15am. The first series, which had previously been seen only in Scotland, was repeated this year for the national audience, however the very first two episodes were not repeated (indeed, they have never been repeated following the original transmission in 1990, and remain unseen outside of Scotland) instead there was a repeat of the first two episodes of the second series. In summer 1993 there was another repeated episode from the second series followed by six brand new episodes.

From autumn 1993 onwards the series was rearranged into themed units on topics such as Safety, Healthy Eating and the Environment. Repeats of previous episodes were interspersed with new episodes - of which there were nine throughout the 1993-94 school year. The series was now broadcast first in Scotland only, on Thursdays at 2:02pm replacing the national broadcasts of Come Outside, Numbertime and Watch Summer Extras. It was then shown throughout the UK on Fridays at 10:40am.

There were similar arrangements throughout 1994-95, with mixture of new episodes and repeats arranged by topic, shown first in Scotland on Tuesdays at 9:45am replacing the final run of You and Me, followed by a national broadcast on Fridays at 9:30am.

Finally in 1995-96 a range of episodes from previous years were repeated, arranged by topic. The series was now shown in Scotland on Mondays at 9:45am, replacing Watch, and then throughout the UK on Thursdays at 9:45am. The series ended as it had begun, as a treat seen only in Scotland, as during the summer term the Thursday timeslot was given over to Writing and Pictures and so Over the Moon was only seen in its Monday, Scotland-only timeslot. 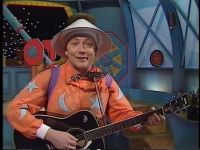 Use your imagination... jump over the moon to me.

Over the Moon's theme tune was sung and performed by Mr Boom on the guitar, harmonica and drums of his one-man-band.

All of the other songs in the series were performed in the same way, and were a mixture of traditional Scottish songs and original educational songs.

Both the opening and closing theme, as well as other songs from the programmes, are available on cassette, CD and MP3 on the Mr Boom is Over the Moon album - see below.

Teacher's notes to accompany the broadcasts were distributed by BBC Education Scotland each term. They contained descriptions of each episode, some of the songs, and ideas for teachers to use the programmes as starting points for topic work. 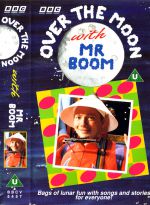 A video containing four episodes from the first series was released by BBC Video in 1994. This was not exclusive to schools but was available in shops to the general public, proving how popular the series became with pre-school children and their parents.

The video was called Over the Moon with Mr Boom, catalogue number BBCV 5457, and contained the episodes Meeting New Friends, Homes, Food Glorious Food and On the Train.

It is no longer in print, but second hand copies can often be found on websites such as eBay and Amazon. Search eBay listings Buy from Amazon.

Mr Boom also had another video out in the early 1990s. Mr Boom Visits Planet Earth was a recording of a live theatre show with Mr Boom entertaining children, rather than the television show with stories and documentaries. This video was released by Cameron Williams, catalogue number CW004, and it can still be bought directly from Mr Boom's online shop. Buy from Mr Boom's online shop Buy from Amazon

Mr Boom had released three albums of children's songs before the series even began. A fourth album, Mr Boom is Over the Moon was released in 1995 and includes the theme tune and other songs from the TV series. All of them are still available in various formats.

Not directly related to the TV series, but a book of words and music to the songs from the first Mr Boom album, Singalong with Mr Boom is available from Mr Boom's shop. Buy from Mr Boom's online shop

Share
Retrieved from "http://www.broadcastforschools.co.uk/mediawiki/index.php?title=Over_the_Moon_with_Mr_Boom&oldid=48340"
Categories:
Cookies help this website deliver its services. By using these services, you agree to the use of cookies.
History
Browse propertiesCite this pagePage informationPermanent linkPrintable versionSpecial pagesRelated changesWhat links hereRecent changes